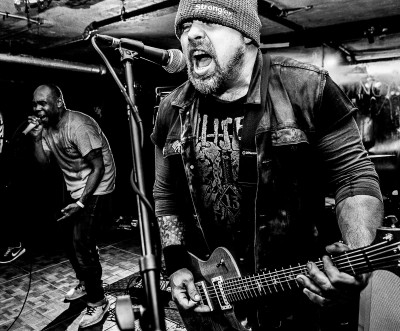 I am always working on something musical. Whether or not it will ever be played for people is another topic altogether. I like to experiment with ideas and try things that I haven't done.

As guitarist with New York Hardcore heavyweights Burn and Absolution, Gavin Van Vlack has played in two extremely well respected bands in NYHC, and his playing is a big part of the bands sound. Gavin Brown caught up with him for a chat about what music he is working on at the moment, keeping busy during lockdown, what Burn are up to in the future, touring with Agnostic Front and Suicidal Tendencies on the Persistence Tour, graffiti, New York and tales from his time with Burn, Absolution and Side By Side.

E&D: Are you working on any new music at the moment?

Gavin: I am always working on something musical. Whether or not it will ever be played for people is another topic altogether. I like to experiment with ideas and try things that I haven’t done. I listen to so many different types of music that I get inspired to see what I can do when I do delve into them. Sometimes it sounds really cool, sometimes not so much. I like to give myself chance to make mistakes and to be able to improve on them. I currently have a batch of tunes that I am working on with Urian Hackney of Rough Francis and some more Canonized material that I do want to release this year as well as a possible new Burn song that is in the works.

E&D: How are you keeping busy during this lockdown period?

Gavin: Writing music, keeping a physical practice of strength training, and Muay Thai, I definitely miss Jiu Jitsu and do plan to get back to it with some close friends. I also have been trying to keep contact with friends as that depression is a very real thing and We need to keep the ones we love close.

E&D: Is the charity boxing match between Danny Diablo and the singer from Trapt you have talked about sorting out going to happen? Hope so and I know who my money is on!

Gavin: Danny was totally down to do it but the line went silent on the other end. I guess our boy Trapt is just a clout chaser. It’s got to be tough when everything you have defined yourself by is dissolving around you and you don’t have the tools to truly reinvent yourself. In all honestly I love Danny, He is Fam but I was really impressed at how Riley Gale handled it. He was asking to go bare knuckle street brawl, was totally punching up a class (Google that term, very useful) and gave zero fux!! Danny knew what the outcome would be, Riley stood his ground to this wanna be bully and Mr. Trapt kept “redacting” his twitter account. Too funny!

E&D: Will Burn be doing anything again in the future?

Gavin: We are supposed to be playing at the next BnB when all the dust settles and as I said we are working on a new song currently.

E&D: What led to Burn getting back together a few years back?

Gavin: Chaka and I missed the energy of that live. There is a certain energy in those songs that is amazing to play live.

E&D: What was the reaction to the Do or Die album and From The Ashes EP that you released?

Gavin: The reaction is what Burn tends to get. When we released the 1st EP a lot of people were taken aback because it wasn’t “what was going on at the time”. We knew that and didn’t care, we still don’t.That kind of set us up to able to do what we wanted with out caring about the critics. Both Ashes and Door Die got great reviews because the people who know us knew that we weren’t going into the studio trying to “recreate” the 1st EP.

E&D: How did it feel for Burn to start recording and playing shows again?

Gavin: Working with Ian Love on Ashes and Kurt Ballou for Do or Die were awesome experiences.

E&D: How did the Persistence Tour across Europe with Agnostic Front and Suicidal Tendencies go?

Gavin: That was such an amazing and fun experience. Agnostic Front are such great dudes that really made everyone on the bill feel super involved and important and the ST crew were equally supportive. All the shows were insane. MAD did a great job with that package. I wish I could pin down 1 or 2 experiences that stood out but there were so many great happening both on and off stage that it’s tough to really isolate one. I think the between show drives with Stigma holding court with the musical accompaniment of Craig Silverman would be a definite stand out.

E&D: How did Burn get together on the first place?

Gavin: I had just left Absolution and wanted to start something different. I knew Alex and Alan from their respective bands at the time and Chaka and I used to write graf and skate together.

E&D: What are your main memories of the bands early days and New York hardcore at the time?

Gavin: I honestly separated myself from the HC scene at that time because of my own involvement in other scenes and different culture. My favorite shows were usually the most confrontational ones like the infamous “Airport Music Hall” in Allentown PA or the Marquis show with KRS-One.

E&D: Do you have fond memories of recording the Burn EP?

Gavin: Honestly? No, I was pretty messed up at that time and even if I was sober recording it I most likely zapped those memories with rugs and alcohol.

E&D: Did you think that thirty years later, the band and the EP would be so revered?

Gavin: I am honored by that. It’s nice to do something that still stands up.

E&D: What were your favourite places to play in NY and further afield?

Gavin: As far as Burn goes? CBs was always killer, the Pyramid was also great venue.

E&D: What has been the most memorable show that Burn ever played?

E&D: What were some of the best hardcore shows you ever witnessed?

Gavin: Nausea were astounding. Born Against were the most amazing cynical comedy ever, they were almost like a musical Andy Kaufman. Damage was another band that never got the props they deserved they would play in any venue and kill it. I love Carl Demola dearly but Underdog, the Richie in the early days were unbeatable. Straight Ahead were bombastic. I don’t feel the need to mention the obvious classics because that is obvious. All of the Big 4 are amazing.

E&D: You also played in a number of other band including Absolution and Side By Side. Can you tell us about your highlights with those?

Gavin: I am still very close with Djinji and Sergio from Absolution as well as Dan and Andy who played in the reformed version. That was a blast. Side By Side was fun but I really didn’t write any of that material. Great dudes and some cool shows. I honestly hate “walking down memory lane” so I will leave it at that.

E&D: What are your earliest musical memories?

E&D: Who are your biggest influences as a guitarist?

Gavin: Not who, What is a better question. The urge to write something that will help someone heal.

E&D: How did you get into hardcore in the first place?

E&D: What have been some of the proudest moments of your music career so far?

Gavin: Learning that I don’t need to be creating music to play live all the time. I like to do music whether or not others ever hear it doesn’t truly matter to me. Not to sound like a snob but that’s just how I feel currently.

E&D: You were also a graffiti writer. Is that something you’re still passionate about and what were some of the most memorable pieces you did?

Gavin: Writers are like Fighters we always think we have 1 lst bomb or piece in us. I would like to think I could go out and do an All City bomb one more time. Bombing with Veefer and JA was always eventful. Piecing with Sane and Smith was always a lesson.

E&D: Who are some of your favourite writers of all time?

E&D: What are some of your favourite spots in New York for music, food and drink and beyond that you could recommend?

Gavin: Living in NY is like currecting a relationship with another person. Currently I cook at home or eat over at friends houses who are also really good cooks. Experiment and take chances, I also haven’t drank in 19 years so bars I can’t recommend. For current hangs I really dig TV Eye in Ridgewood BK, and there is no better live venue that Saint Vitus in my own opinion.

E&D: Thanks man, Any last words for everyone out there?

Gavin: Be kind to yourself and extra kind to others.