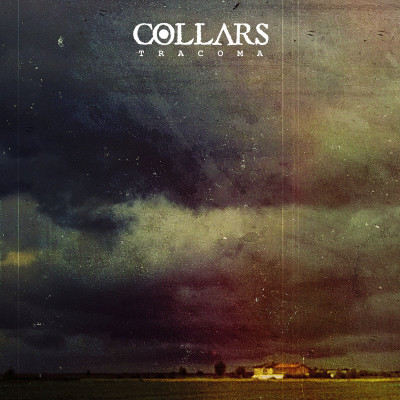 A music scene that I have always missed out a bit is that of Italy. There are a few of the bigger bands I have enjoyed over the years and debut album Tracoma by Collars has once again piqued my interest in what the country is producing. I have heard of neither the instrumental band Ornaments nor the math-noise duo Nadsat that Collars collects its members from, but they seem like a good place to start after greatly enjoying this dark instrumental post-metal release.

When ‘Osmio’ started off with a snarling guitar and roundhouse drumming I felt like I was entering a 90s hardcore album as it has a slightly brutalist edge to it. However, as the song and album unfolds I find a rich textured post-metal album which is purely instrumental. This isn’t done in the vein of Pelican or Russian Circles but sound wise glances more towards Fogdiver era The Ocean.

Like The Ocean, Collars are not afraid to take you on a twisting journey to the edge just to back away and build once more or even take you down a different route. ‘Osmio’ feels like it’s going to throw you off the edge before it quietens down and drifts through noise to its conclusion. Like a good horror there are moments where the suspense grips you and the release is either a ripping darkened crescendo or falling back into the depths. ‘Spira’ goes through with the promise and sears to a crashing end but there is a constant suspense throughout the track and the album.

With each track varying from six to nine minutes there is plenty of room for pace to rise and fall and shift from quiet to loud, but the atmosphere never cuts. This gives the music a real unique stamp even though it can cast up some familiarities.

That rawness which opens the album is carried in each track and spills from the drums to the guitars and in ‘Livido’ the bass takes over to give the guitar a darker path to follow. The longest song on the album is the one that grabs me the most, ‘Cumuli’ is an absolute cracker of a song. The stuttering guitar reminds me of Cult of Luna covering ‘Bodies’ by the Smashing Pumpkins and it’s got such a beautiful tone. The band even has time to slip into a bit of laid back Neurosis feeling during epic closer ‘Lautre`amont’ which could quiet easily feature the deep drawl of Steve Von Till.

Tracoma is a cracking listen that carries an edge that is missing from many of the larger instrumental post-metal bands. Over 44 minutes it manages to be individual, familiar, comforting and unnerving and that truly is a mighty accomplishment.