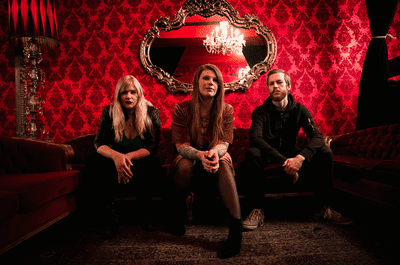 I am always so inspired by love and the pursuit of creating.  Those two very different feelings fuel my inspiration.

The White Swan are a band from London, Ontario who combine sludge and doom influences with a synth rock vibe to create songs that are as hypnotic as they are heavy. The band shave just released their latest EP Nocturnal Transmission, which showcases exactly what the band are about. With the EP out now, Gavin Brown had a chat with drummer/vocalist Mercedes Lander to hear all about Nocturnal Transmission and everything The White Swan.

E&D: You have just released your new EP Nocturnal Transmission. How did the creation and recording process for it go?

Mercedes: Writing Nocturnal Transmission was business as usual. I usually start with a pile of riffs that I record as voice notes on my phone and start to piece them together. Once I have a general outline of the song usually Kira and Shane will come over and we jam those songs out to kind of solidify what the song structure will be. Once the song is put together I usually start working& on melodies and putting lyrics I have written to melodies in my head. Usually, I will change something right before we go into record, in this case it was the entirety of ‘Purple’.

E&D: How did it feel to get back into the studio to record this new material?

Mercedes: I absolutely love being able to create and love taking the vocal arrangements from my head and hearing how they actually sound. Working with Siegfried as long as I have has developed a huge amount of trust between us. He knows what I’m after and is just as weird as me.

E&D: What were your biggest inspirations when it came to making Nocturnal Transmission?

Mercedes: I am always so inspired by love and the pursuit of creating. Those two very different feelings fuel my inspiration.

E&D: You cover ‘Tell It To The Sky’ by Tracy Bonham on the EP. What made you pick that particular song to cover?

Mercedes: I‘ve always loved that song and I felt like, if no one knew any better, you would never know it was a cover. It just fits.

E&D: What other artists and songs would you love to do a version of in the future?

Mercedes: I have an entire playlist on Spotify dedicated to songs I want to cover.

E&D: How does the new material compare to your last release Touch, Taste, Destroy?

Mercedes: I think Nocturnal Transmission falls right in line with the evolution of The White Swan.

E&D: Who are the biggest influence on the sound of The White Swan?

Mercedes: To be honest, I don’t listen to a lot of current music and really just stick to 70’s glam and synth rock. I’m a big fan of large vocal arrangements so I feel like it’s pretty clear what I’m influenced by.

Mercedes: Kira and I played in a power pop band called the Alcoholly’s for a couple of years and when things started to wind down with that, and I had a bunch of songs, I asked her and Shane if they wanted to play with me.

E&D: What have been some of the highlights of your time in The White Swan so far?

Mercedes: We’ve played so many amazing shows and met so many amazing people, so there really isn’t one instance that sticks out. We are so lucky to be able to have played with so many other talented bands and feel nothing but gratitude towards everyone who has supported us.

Mercedes: I think music in general is my influence. I know that sounds weird, but I can’t think of one band or musician that i’ve ever tried to emulate.

E&D: How have you been keeping busy during this pandemic?

Mercedes: I’ve been working lots and have just been compiling riffs as usual, so not much has changed except we haven’t been able to play shows.

E&D: What music are you enjoying at the moment?

Mercedes: I’ve been really enjoying revisiting ELO’s back catalogue along with Sweet and Roxy Music.

Mercedes: Playing live was the reason why I started playing music in the first place. This is the longest I’ve gone without playing a show in 22 year. Needless to say I miss everything.

E&D: What has been the best gig that The White Swan have ever played?

Mercedes: The show that sticks out the most for me was our Toronto debut. It was our second show ever and we had a packed house at the Bovine. It was amazing to see so many people enjoying the set as much as we did. 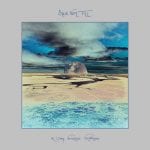