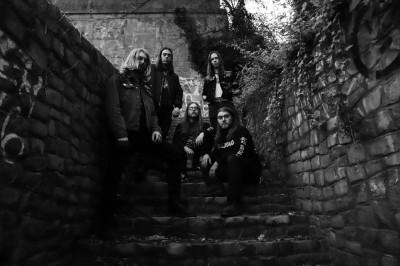 As if the modern world isn’t a tightening torture device already, we wanted to harken back to what we truly liked listening to. We wanted to write an album that we would've been fans if we hadn’t been a part of it.

With their latest album Kill Grid, a record that is packed full of razor sharp and high energy anthems ready made for the moshpit, Richmond crossover thrashers Enforced have built upon the momentum started by their debut album At The Walls and raised the stakes even higher. Gavin Brown caught up with Enforced vocalist Knox Colby to hear all about Kill Grid and Enforced as a band as well as working with Dwid from Integrity, essential crossover albums, memorable tours and the long awaited return of live shows.

E&D: Your new album Kill Grid is out now. Are you excited about getting your new material out there?


Knox: Yes! We are happy and proud to be releasing new music to everyone. It’s been a long time coming, and I know we are pumped to show the world what we’ve been working on.

E&D: How did the creation and recording process of Kill Grid go?

Knox: It’s been a long but constant process. We never stop writing, demoing and working on material, so to buckle down and write a cohesive LP was something new and exciting to us. The first song finalized was ‘Hemorrhage’, after demoing with other songs. Once we got over that hill, the rest of the songs, in terms of learning from mistakes and tropes, came pretty quickly. ‘Beneath Me’ was next and we played once at a house show to see if it was up to snuff. Suffice to say, there were footprints left on the ceiling, so we knew we were on the right path. From there, we flexed to expand and focus on what we felt was important: strong riffs, strong breakdowns, strong delivery.


E&D: Was making this album made more difficult with everything going on with the pandemic?

Knox: Not necessarily. All was written by the end of 2019. I worked on lyrics on our January 2020 tour, as well as concepts and designs with everyone, until we hit the studio late February/early March.

E&D: How was the experience of working with Arthur Rizk again and Bob Quirk on the album and what did they bring to it?

Knox: It was comfortable and honest. Everyone involved (I don’t want to ignore Ricky Olson who helped record the drums) wanted to steer this album into a precise arrowhead of impact. We knew Arthur and Bob could make it happen, but expand on what we’ve done prior (At The Walls) and really make a cohesive piece. I’m pleasantly surprised with what their work has produced. They are true masters at their craft.

E&D: Did you feel any pressure with this record in following up your debut At The Walls?


Knox: Yes, but only from ourselves. There was no outside pressure to perform or write in a specific way/format. Enforced was able to do what Enforced does. I’ll concede that signing with a bigger label like Century Media exposed us to a far larger audience, so the question of “Will these new listeners accept us?” was a thought, but it was pretty fleeting. We wrote the album we wanted to write. I’m just happy with how many people have been able to hear it, regardless of positive or negative reviews.

E&D: What has been the biggest influence on the sound and themes of Kill Grid?

Knox: As if the modern world isn’t a tightening torture device already, we wanted to harken back to what we truly liked listening to. We wanted to write an album that we would’ve been fans if we hadn’t been a part of it. So we wrote what we knew and what we loved: Hard, fast, slamming songs.

E&D: You released three songs from Kill Grid so far before the albums release as well . How has the new material been received so far?

Knox: As of 4/20/21, the reception has been astounding. I never knew of the audience we could reach or relate to. It has been an incredibly eye-opening and humbling experience. I’m just grateful for people opening their ears to us. Let’s focus on the future and slam together.

E&D: You’ve done videos for those songs (Malignance, Haemorrhage and Curtain Fire). Do you still think that music videos are an important medium for bands?

Knox: It wasn’t until it got closer to the album release that a video or visual aspect of the song(s) became more of a focus. We had only done one video prior (Skinned Alive), but we knew still reeling and dealing with the pandemic, videos could help people engage and connect with the music easier. We didn’t want to simply drop a track with a static image and leave it at that. We wanted to motivate ourselves to try new things and expand our experience in video, and I would credit that growth solely to Mr. J.D. Burrow. Thank you.

E&D: Have you got any live plans at the moment as soon as gigs can start happening again?

E&D: When was the last gig that Enforced played before things got shut down?

Knox: A local show at Canal Club with Creeping Death and Chamber. Late February 2020. I made a lot of new friends that night, hopefully they survive throughout my lifetime.

E&D: How would you describe the Enforced live experience? I’m anticipating a lot of energy!

Knox: Aggression, in all forms. Some may want to pit by punching the shit out of others, some may want to circle pit, others want to push pit. We welcome it all; the best advice is to move to stay alive. A sedentary viewer could be caught unaware. Be cognizant of your surroundings, and kick someone in the throat if necessary.

E&D: Are you looking forward to playing a load of new material when you return to the stage?

Knox: 28 Trillion% (the current US national debt as of typing this out).

E&D: When they return, do you think that gigs will be more celebratory?

Knox: I sure as shit hope so. If not, no skin off my back. I’m going to play and perform harder than I ever have.

E&D: What has been the most memorable gig that the band has ever played and what made it so memorable?

Knox: I think this would vary between members, but personally, my most memorable was playing with Sacred Reich, Iron Regan and Exciter in Toronto. Biggest crowd I’ve ever played in front of, a fitting close to a great tour and an all around positive experience. Close second was playing LA on our first full US tour and getting to play with our friends in Red Death and Dead Heat all at the same show. Homies.

E&D: What has been the best gig that you have ever witnessed?

Knox: Based on what? Anything? By my summation, the best gig I’ve ever witnessed was when Blind Justice played United Blood festival in Richmond and the pro-wrestler Brody King power bombed someone through a table on stage…. What more could you ask for???

E&D: You worked with Dwid Hellion from Integrity on the song ‘Skinned Alive from At The Walls’ and he also did the album cover. How was the experience of having him and working with him on the album?

Knox: Dwid was a get and I didn’t expect him to be willing to work with us at the beginning. Surprisingly, he was very excited and pumped to work on At The Walls with us, both lyrically and on the album art. After working on the song and the album, we got the opportunity to play a weekend stretch with Integrity, and we connected more. I’m happy and appreciative of our work together.

E&D: Who did the artwork for Kill Grid and did you want a similar feel to At The Walls?

Knox: The only feel we wanted to carry over was black and white. Devoid of color or feeling; just bleak. Joe Petagno did the artwork (his signature is on the front cover) and he did an incredible job. It exceeded any of our expectations.

E&D: How big of an influence are Integrity on the sound of Enforced?

Knox: Not terribly, maybe subconsciously. I know my voice gets compared to Dwid’s and Ringworm’s Human Furnace. Maybe it’s something unique, I really don’t know. I’m just projecting how it feels natural. In terms of the music, I would say it’s an underlying influence. If you listen to it and pick up on some Integrity licks or notions, good for you.

E&D: Who would you love to guest on an Enforced song in the future?

E&D: What are your favourite thrash and crossover albums ever?

E&D: What have been some of the biggest highlights of your time with Enforced so far?

Knox: Touring with Sacred Reich, Leeway, Integrity, All Out War… I can’t pick anything in particular, so I’ll point out a fun moment on tour with our friends in High Command. Kevin (vocals) and I somehow got roped into a high stakes arm-wrestling match. I was apparently the odds favorite, and Kevin destroyed me after a long and grueling match. A lot of screaming and a lot of encouragement went down that night. It was fun, I’ll cherish it forever.