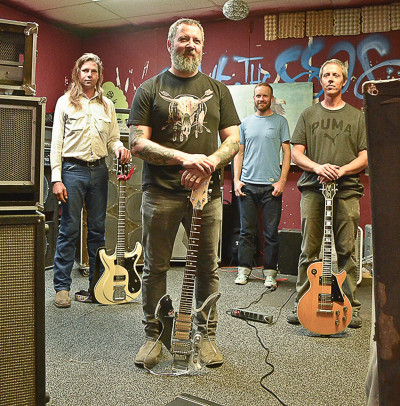 The images of the Firebird rising from the ashes and the Ouroboros completing another cycle seemed especially poignant for a return after such a long time.

Influential Salt Lake City band Iceburn have recently returned after a hiatus of twenty one years with their stunning new album Asclepius. The record contains two epic tracks and sees the band combining metal, jazz, psychedelia and punk in boundary pushing ways that they have down throughout their career. Gavin Brown caught up with Iceburn guitarist / vocalist Gentry Densley to hear about the band’s return, how they have developed their sound and the creation of Asclepius as well as looking back on the history of Iceburn, from the band’s early days on hardcore labels Victory and Revelation all the way up to what they have planned for the future.

E&D: Iceburn have just released their brilliant new album Asclepius. How did the creation and recording of the album go?

Gentry: We had been playing these songs regularly for several months and went into the studio with Andy Patterson, who is a good friend who we’ve known since the beginning of this band.  We busted out like 3 takes of each song and took the best one. After mixing and doing vocals we decided to add an Intro and Outro for ‘Healing the Ouroboros’ to make the sides a similar length. We usually played the intro live kind of off the cuff and forgot to record it initially. The outro is something we like to do for fun, let Cache summon some bass demons while we hit big accents.

E&D: Asclepius consists of two epic songs in ‘Healing The Ouroboros’ and ‘Dahlia Rides The Firebird’. Can you tell us about what the tracks are about?

Gentry: The seeds and themes have been around for a while and finally found a home in our new/old Iceburn incarnation. The riffs contain symbolism that relates to the subject matter. Lyrically ‘Ouroboros’ is about not just breaking destructive cycles but healing them, there is a line that didn’t make it on the record but it relates to this song, “All your damage has been destroyed”. Iceburn has always been attracted to paradox, it’s in the name. ‘Dahlia’ was initially about life cut short, but then became a kind of meditation on letting go, and not trying to force your own expectations, especially things you can’t control.

E&D: Did you always plan to just have the two tracks on the release or did you decide that when those were finished, that’s all you needed?

Gentry: We initially recorded 4 songs, but after looking at the length of what we had, it fit better on one LP.  After talking with the label there are definitely plans to release more, as we have even more, but these two songs seem to compliment each other and create a strong and balanced release.

E&D: The record has elements of metal, jazz and psychedelia amongst others, Iceburn have always been a band who were not afraid to experiment with sounds. Were you keen to carry on that tradition?

Gentry: Oh yeah, that’s all in our DNA! Iceburn at its roots was always very riff based but you’ll hear some chords in there straight out of Mahavishnu Orchestra, but you’ll also hear some ZZ Top, AC/DC, or Maiden, and we love to jam, more like Bitches Brew than some jam band, but in the jazz tradition of improvising and soloing over a vamp or riff, when done with loud guitars gets very psychedelic. Miles Davis albums like Aghartha and Dark Magus were very important to us in our formative years.

E&D: What has been the biggest influences on the sound of Asclepius?

Gentry: I would say that our earlier albums, like Hephaestus and Meditavolutions, informed our approach and sound, so our younger selves have been a big influence not only in seeing what worked but in seeing/hearing what we didn’t want to do. Saying oh we want to avoid those pitfalls, or avoid that weird bass, guitar, or drum sound, but this format is totally us and allows the most expression within the form.

E&D: This is the first new Iceburn album in twenty one years, since 2000’s Land of Wind and Ghosts. How does it feel to be unleashing new Iceburn music after all that time?

Gentry: Great! Long time coming, we spent a couple years to get it right. The images of the Firebird rising from the ashes and the Ouroboros completing another cycle seemed especially poignant for a return after such a long time.

E&D: How have Iceburn changed as a band in that time?

Gentry: We’re all fathers now, some with sons, all with daughters. We get together and practice and hang out regularly so, as a group of old friends, instead of getting together for drinks or going out to dinner we get together and crank up our amps and have a good time creating music.

E&D: Does it feel exciting for Iceburn to be back?

E&D: What has the reaction been like to the new album so far?

Gentry: Great yes, most people are very excited and I haven’t heard any complaints so far!

E&D: The band have said “Iceburn had always been about progressing and pushing the boundaries”. Do you feel that this sums up Asclepius and Iceburn today.

Gentry: I think no, Iceburn in its current state is coming from a place of maybe more maturity and experience where we have tried many things and pushed many extremes, and those things inform how we write and create. We are using our collective filters to present music that reflects who we are at the core and why we started playing music in the first place.

E&D: What was the impetus behind Iceburn reuniting to make the album?

Gentry: Well, we had the outlet in Southern Lord records, as Greg said, if you guys record something I’ll put it out! We had done a few reunions and decided we should try some new music, it wasn’t instantaneous but we quickly found a sound that felt like us and things started flowing pretty easily.

E&D: Have you had any thoughts about any further new music at all?

Gentry: Oh yeah there’s more in the pipe, so to say. Greg Anderson wanted us to do a version of ‘Discolor’, which was on Poetry of Fire as a live version only. He’s always loved that song and used to ask us to play it when we toured together back in the 90s. So we have a version of that song and a few more epic new songs and have even been working on re-masters of some older records like Hephaustus and Firon.

E&D: Iceburn have played a few live shows over the past few years. How did they go and was it good to get back onstage playing Iceburn songs again?

Gentry: Yeah it’s always a blast. The new stuff has been very well received as well, since it is in a similar vein to the old blood.

E&D: Will you be playing shows and touring in support of Asclepius once it is possible to do so and will that include a trip overseas at all?

Gentry: Yes we’d love to but no plans so far, the pandemic made things like that a bit screwy but we will definitely try. We’d love to come play some festivals and visit some places that aren’t America!

E&D: How do you feel that the songs of Asclepius will translate in a live setting?

Gentry: We have been playing it live for a couple years now. I think it may challenge some people as certain parts of it come together differently each time we play it, but that is our modus operandi, and I think people familiar with the record will know that about us and appreciate it, while those who maybe are unfamiliar won’t even be able to tell the difference. You need that spontaneity to keep the music fresh and exciting for those who are playing it, it keeps us more engaged and on our toes, and that translates to a better experience for the audience as well.

E&D: What Iceburn shows stand out as memorable to you from over the years?

Gentry: Oh man there have been some crazy ones! Like when we got booked with Suckdog and Hazel in Olympia, WA and it ended with the ambulance coming to take some people to the hospital after some sheer weirdness involving bullwhips and indian leg wrestling. I remember a crazy good set in NYC shortly after Hephaustus had been released. Our first reunion show in 2007 was really great and really fun and just a cool thing overall, there is a short documentary around it called SLUG Magazine Presents: Making a Scene, it’s on the youtube if you want to watch.

E&D: Do you look fondly back on the bands early days and time on Victory and Revelation Records and what were some of your memories of those times?

Gentry: Not so fondly with Victory the label itself, I recently hired a lawyer and got the rights back to all that early Iceburn stuff so we are remixing / remastering actively now for re-release soon, I hope. Revelation and Jordan especially were always super supportive of whatever we wanted to do. I’m not sure we would have gone down such an eccentric path if we didn’t have an outlet that was so willing to back our vision. We did a really fun tour with a reunited Inside Out, as a benefit for the Western Shoshone. Zach had recently started Rage Against the Machine and it was just starting to blow up. Inside Out was so great and kind of a kindred spirit and influential in that way in the early years of Iceburn. We realized then that we weren’t really the types to talk during shows between songs and incite revolution like that, but that we were going to use the music to push our ideas and our own revolution of sorts that way.

E&D: What were some of the bests shows that you saw during that era?

Gentry: Early on Bl’ast was mind blowing and game changing! My favorite things I was seeing in those days were the Melvins and Fugazi and Bad Brains… not all at the same show though. Drive Like Jehu was amazing to see… Favorite would have to be Engine Kid opening for Caspar Brötzmann, life affirming!

E&D: What have been some of the highlights of your time with Iceburn so far, both past and present?

Gentry: I think the times when Iceburn and Engine Kid were touring together, man no cell phones, no internet, just using pay phones and big folding maps and atlases to navigate this crazy country. Playing and hanging out with Lungfish. Playing Stravinsky’s Rite of Spring live. Hanging out with Rich Jacobs. More recently just opening a box of brand new Iceburn records and seeing how beautifully it all came together, was very much a highlight.