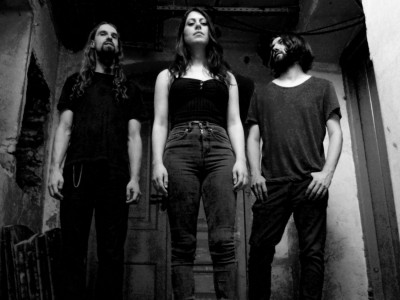 Although ‘until’ is very different from ‘below’ they are both developed in the same emotive world but we are just responding to it in a different way, with ‘until’ being far more aggressive and ‘below’ having a much more introverted feel.

A few weeks ago we premiered the incredible new video for the track, ‘below’, from Maud the moth‘s new band healthyliving. Today, we not only premiere the new video for their track, ‘until’ but also share Adriana Ciccone‘s interview with founders Amaya López-Carromero, Scott McLean and Stefan Pötzsch where they talk about the video, the new project, and more.

(((o))): I’ve read that the three of you are long-time collaborators and friends. What prompted you to officially form a band and release music now?

Amaya: I think we had been talking about it for a while and it just reached a critical point. In the summer of 2019, I was playing some gigs as Maud the moth in Spain, Portugal, and Germany and also attending Prophecy Fest later in September, so I planned a longer visit in Dresden and stayed with Scott. We basically spent that whole week going to the rehearsal space with Stefan and working on music. It was just the right time to do it.

Scott: I think over time it was just inevitable that we would have a band together. We had all collaborated with each other multiple times with different bands/projects that it just made sense that once we had some time we would work on music together as a trio.

(((o))): Was it difficult to write and record while living in different countries?

Scott: We were able to all be together in Dresden in the summer of 2020 so that allowed us to spend more time working and recording. In general, for projects, I don’t find it particularly inspiring to be working at a distance by sending each other audio files, so I always try to keep this to a minimum.

Stefan: Yeah, Scott and I were always working on the tracks with the both of us being in Dresden, that part has just been working out pretty intuitively.
The slightly harder part is probably going to be getting together as much as possible in the future which is obviously quite tough for the time being, but I’d expect we’ll manage that and probably quite easily once everything is going to stabilize to a degree.

(((o))): Can you tell us a bit about the writing process? Do the lyrics come before the instrumentation or vice versa?

Scott: The initial writing process was based around self-imposed limitations to try and capture each song with pure intent. Stefan and I would have jams/writing sessions together here in Dresden and the rule was that whenever an idea started to feel good, the structure and song had to be finished completely in that session. The other limitation with regards to the writing process was that the songs would only ever have one guitar, bass guitar, and drums, and when recording we would only layer new sounds but they would always be playing the same part that was initially written.

Usually, after each session, we would have a couple of songs that we would send to Amaya. I think over the course of our writing sessions we built up around 20 songs, and the idea behind this was to just let Amaya freely react and respond to the ones she felt most connected to. I think this method and use of limitations was particularly useful because we couldn’t all be together to initially write the material, so sending just small ideas or things that needed a lot of work to be finished would have been a really slow process, and would have made it much harder to capture songs that had a pure intent.

Amaya: This was definitely a weird one for me, as I tend to write lyrics either first or at the same time as the music. Actually in some cases I still improvised vocal lines using freely-written text which resonated with a song in particular, but in general there’s been quite a bit of “untangling” the vibe in the demos to make some of it make sense.

(((o))): The band name healthyliving conjures up many ideas and images; even a little bit of mystery too. Is there a story behind the name? What does that name mean to you and what do you hope it means to fans?

Amaya: We just wanted a name that encapsulated the cynicism and toxic positivity that surrounds us daily. To me, this triggers certain melancholy and introspection that resonates a lot with the music born from this project.

(((o))): Your first release ‘until/below’ is beautiful and haunting. The lyrics, vocals and instrumentation work symbiotically, as if they have always existed, together. It’s fluid. A few weeks ago, E&D premiered the video for the track ‘below’ that both Amaya and Scott put together. It’s clear that nature plays a big role in your music. Can you speak of that and tell us about the process of putting together the video?

Scott & Stefan: It was actually Amaya that did that whole video!

Amaya: Thanks! I have delved a bit in video making in the last couple of years and it’s something I really enjoy because I am completely self-taught and there’s no self-criticism yet involved in the process. In ‘below’, the clips are a collection of old natural science documentaries in the public domain and some videos that I took near my house on walks during the lockdown. I became quite fixated on the evolution of the natural environment around me and I think this comes through a bit in the video.

(((o))): Today E&D premieres the video for the track ‘until’. I find this track has a different mood and feel compared to ‘below’. It really showcases each of your talents in composing music. The way the track ends is unique. Sort of like a warning has been set in motion. Can you tell us about the track and the video that accompanies it?

Scott: ‘until’ was the first track written for the band, this was before we had any defined idea of what we were going to be doing as we hadn’t discussed the direction of the band before we had any music; it was informed on reacting to each other’s expression rather than a fixed direction. Although ‘until’ is very different from ‘below’ they are both developed in the same emotive world but we are just responding to it in a different way, with ‘until’ being far more aggressive and ‘below’ having a much more introverted feel.

Amaya: For this video I tried the same approach as for ‘below’, but things got a bit out of hand given my video-making limitations, so I needed help finishing it. My friend Ana López, who made a video for Maud the moth, did most of the heavy lifting – editing and adding her amazing personal touch and vision which was a perfect match for this song. I somehow find it very aggressive visually which was super fun to do under a symbolic approach and resorting to movement and colour to convey this rather than more explicit imagery.

Scott: Hopefully as soon as possible, but with everything going on at the moment (Brexit and Covid), it’s quite hard to have any fixed plans. The album won’t be recorded separately, with us sending audio files to each other and building it up that way, as it’s very important that the album has a cohesive sense of space created in a real environment and not just artificially created after the fact; so we just have to find a solution to all be together in the same space.

Stefan: Adding to that, we are really eager and dedicated to get the album on track and do the music the utmost justice from a performance as well as a recording/production point of view despite the current situation. I’d like it to happen sooner rather than much later, but once it’s going to happen, it is going to be happening for sure.

(((o))): What are some albums or literature that have inspired you this past year or so?

Scott: I wouldn’t say I have any that have particularly inspired me, especially not with what we’re doing with healthyliving, I try to be inspired by feelings and experiences, finding ways to express them, rather than other artists. On the other hand, there are some pieces of art/music/performances that I’ve recently taken note of:

Amaya: I’m not sure I take direct inspiration from the culture I am particularly focused on at present, but rather I pile it onto some form of baggage that seeps into my own expression as time goes by. Reading-wise, I really love poetry and relied on local spoken word acts for recommendations to renew my literary pantry, so this got quite deprived during the pandemic… I am currently reading Blue hour by Carolyn Forché which is beautifully harrowing and I can totally see it influencing my lyrics in the future.

Musically, definitely Cloud Rat and Eartheater. I’m also pretty obsessed with LEYA, Emptiness, Have a nice life, trajedesaliva, and the most comforting album ever written: Voidwards by Dolorian, which has been going strong for a couple of years now in my personal library. I’m also very interested in some of these crossover “doomy” bands like King woman, Dolch and Gold.

Stefan: It’s interesting to think about that question, honestly. I haven’t really been on the consuming end of the cultural spectrum for a while now in terms of discovering new music or literature, so there are no real recent examples of that for me. I guess my drive of creating something new is mostly inspired by that creative process itself.