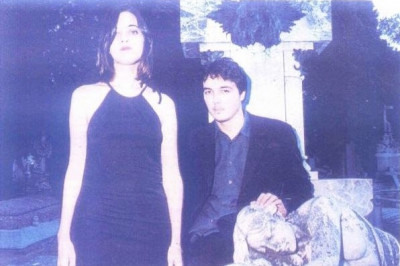 Not being really connected to anything gives you the freedom to do your thing, and we like to find different approaches and engage with genres differently in each of our albums.

Back in February of this year, Spain-based duo trajedesaliva released their album Ultratumba via áMarxe, Ferror Records and GH Records. It’s an album that tells a story through emotive synth playing and layering and spoken word. It sets the stage right from the start and keeps the listener engaged until the end. Adriana Ciccone caught up with spoken word artist and half of trajedesaliva, unavena, to discuss how the band came to be, the new album and more.

E&D: How did you both meet and when/how did you decide to form a band together? Has it always been a duo project?

unavena: Well, it’s funny, but, actually, the band came to be by absolute chance. Mon and I had been exchanging messages on an online music discussion forum, back in 1997. For 5 or 6 months, our contact was only through emails, we were living in different cities at that moment until we arranged to meet in person. Which we did at some point. I remember I instantly felt very, very comfortable next to him because we are quite similar, both super shy and indrawn, and the thing is that we decided there and then, pretty much out of that connection we had, we should do something creative together. Later that year we signed to a Galician label, Splat, who put out our first work: a 4-track EP, titled El cuerpo y la ciudad (The body and the city).

The EP was followed by a full album, Mima, released in 2000, another album in 2003, Mima blanca (actually this is a record in which we reinterpret the music of Nico and Diamanda Galás). Three years later we teamed up with another Spanish spoken word project (Chaos Condensed) to release a split CD, in which each band contributed 4 of their own tracks, recorded separately, and made two tracks together.

For these 3 recordings, we brought in different musicians who collaborated with us, enriching the sound of the albums with their contributions on guitar, accordion, sax, trumpets or drums…

So this creative partnership of ours has been at the heart of the band since the very beginning, really. And on Ultratumba it’s just the two of us again. I think we have a complimentary, symbiotic relationship that has always worked very well!

E&D: Were you always interested in composing experimental, dark ambient, drone music and how important is the spoken word in your compositions? Do the words come first then the music around the words or vice versa?

unavena: We certainly want to explore different territories as time goes on. Not being really connected to anything gives you the freedom to do your thing, and we like to find different approaches and engage with genres differently in each of our albums.

The spoken word elements are not always front and centre but they’re important in the telling of the story the album is built around.

For us, it’s always the concept that comes first. Then both the choice of instruments and the lyrics go from there.

E&D: When listening to your latest album Ultratumba I hear lots of musical influences. Who and what has influenced each of you in your music?

unavena: Well, we’re open to many things but I’d say our main influences come from artists like Cluster, Nico (there’s nothing quite like her), Diamanda Galás or Throbbing Gristle. We feel very aligned with these artists. Other styles may creep in as well, of course… And, although Ultratumba is not really an album that would fall under the umbrella of folk music, it does sound, in a way, very folky to us, bringing to mind Galician artists such as Emilio Cao (his album Fonte do Araño is such a beauty).

It’s funny, because we both typically see and describe music to each other as colours and textures when we talk about it, and we’ve always found the sound of Ultratumba to be dark green, mouldy and damp, so very Galician!

E&D: Your album is very emotive from its instrumentation to its spoken word and the artwork and videos that accompany it. Could you tell us about what the album is about, what influenced you to write about “a family dialogue, full of sadness, acceptance and hope, that digs into the origin of melancholy”?

unavena: Well, though song-structured, Ultratumba has a conceptual base with the text often taking the shape of a dialogue in which ghosts of the past speak to those living in the present, haunting them, contaminating their lives and passing on to them a sort of pathological stuckness, an inability to develop and communicate.

So Ultratumba for us has worked as a way to express the personal experience in a poetic, dreamlike, sometimes hallucinated manner.

‘Queremos verte’ (We want to see you), which is probably my favourite on the album, is a very simple song, however, it’s emotionally very deep as well. And it’s literally a family dialogue: you’ve got the father and the son approaching the place where the mother is hiding/buried, urging her to come out and join them in the sun, go for a swim together in the river. Ultratumba is an album that can get beautifully sad!

E&D: The album is emotional and it translates through to the listener. Was the writing process difficult to get through? Did you find it cathartic?

unavena: It’s been cathartic in a way, yes. On the album, we speak about the permanent disturbances of traumatic memory, and we’ve certainly come to a sort of acceptance of our own feelings of pain and deep vulnerability. It’s been a very emotional process for us but we’re very happy to see that our music has inspired identification and resonated with people who have the same sensibility.

E&D: Can you tell us a bit about your writing process? Do you write together? Do you both contribute to the spoken word, instrumentation separately then share ideas?

unavena: We like to start off by setting a mood, a concept for the album, and then we build the words and the music around that. After we share ideas and try to work out how to blend both parts.

The type of narration that I write is usually more about interior and relational experiences so I enjoy getting total freedom to write, which I do in an attempt to liberate my unconscious and express those experiences poetically. The reality is that the texts are quite cryptical and obscure, they don’t bear a literal truth. Of course, there’s a surface interpretation that you can grasp but there’s always so much more lying underneath!

E&D: I read that the album was recorded using only analogue synths and voice. Can you tell us about your gear?

unavena: That’s right. All of the material on Ultratumba was written and played by Mon alone, and all of the sounds rely on these analogue synths that make the most incredibly beautiful rich, fat sounds. He also runs them as he plays through a variety of pedals to open out a multilayered and thick sound that I love.
He’s used synths that I believe have a very distinct personality, mainly the monophonic Nyborg 24, and Fusebox synths, from Analogue Solutions; the paraphonic synth Nyx, and the Abyss, from Dreadbox, the polyphonic synth Peak, from Novation and the Lyra 8, from SOMA.

E&D: You have two videos out for a couple of your tracks, ‘A casa por las vias’ and ‘Arenas calientes’. Were both created by Marcos D.H./Sinestèsies? What was the process in creating these videos? Did you already have an idea in mind?

unavena: Marcos got in touch with us while we were starting to work on Ultratumba. He wanted to do a video for ‘Ya no soy quien solía ser’ (which translates as I’m not who I used to be), which is a song from the split album we released back in 2006.

He did an awesome job on that one, where he captured perfectly the mood of that song. After that, we asked him if he’d do a video for one of the songs of Ultratumba.

‘Arenas calientes’ (Hot sands) was the track he liked the most. It happened to be one of our favourites as well and the one we had chosen as the teaser track we’d open the pre-sale of Ultratumba with. So that’s how it all came about.

We then discussed the text and the motives in the song together. I have to say though that it was mainly all his own visual interpretation of it. I think his style works beautifully for our music.

‘A casa por las vías’ (Walking back home along the rail tracks) on the other hand, was our first attempt at making a video all by ourselves. It was something that came quite naturally, putting all these bits and pieces together to create a narrative that would convey the tension of the song, this idea of growing up in a dangerous household. It may not be the most glamorous of videos but we certainly enjoyed the process!

E&D: Who is the artist behind the album cover and drawings in the video for ‘Arenas calientes’?

unavena: The artist behind the album cover is Emilie Lagarde. I came across her work on Instagram, again, by absolute chance. She is nothing short of fantastic. It still amazes me how the colours, textures and motives in her paintings fit the world of Ultratumba so perfectly!

Marcos took care of everything on the video for ‘Arenas Calientes’, including the drawings and the animated bits.

E&D: Are you planning on doing any shows, either live or via livestream, in support of the album?

unavena: We’d love to be able to create a live show that’s entirely organic and played in real time, just as it was conceived and played in the studio but at this point we feel we still need to give it a bit more thought.

E&D: What’s next for trajedesaliva?

unavena: It always takes a while for reality to set in after finishing a record, especially one as emotionally intense as this one, but I feel that we’re slowly entering a period of exploration where we’re starting to see the new direction to travel to musically… but basically we’ll just continue to evolve and do whatever flows naturally.

We also have a couple of collaborations in sight too that we are super excited about!

E&D: Lastly, what bands and/or books have you been enjoying lately?

unavena: It can be overwhelming at times but I do try to keep up with new stuff being released in the experimental and ambient arena. Lately I’ve been listening to Sarah Louise’s latest album Earth Bow quite a lot. It’s a feel-good record and I like how diverse, immersive and well woven together it is. It feels very grounding and just puts me in a very peaceful place. In any case, I have a big soft spot for traditional British folksingers like Sandy Denny, June Tabor and Maddy Prior or Shirley Collins.

Amaya – Maud the Moth is another artist that we both love.

Thanks a lot for the questions Adriana and for playing our music on Hexon Bogon! It’s been a pleasure 🖤