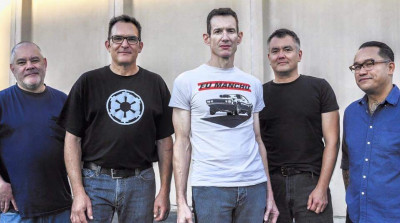 To know that we still have some relevant song writing in us, and also that our music is good enough to hold up against our previous albums, it’s very exciting.

Chicago punk legends Naked Raygun have returned with their new album Over The Overlords on Wax Trax, their first studio album in over thirty years and it sees the band sounding as powerful as they did in their heyday. Gavin Brown had a chat with vocalist Jeff Pezzati about the album and the band’s return as well as memories and history of Naked Raygun, the punk scene in Chicago, his time in Big Black and having Dave Grohl as a fan.

E&D: Your new album Over The Overlords is out now how did the creation and recording process of the album go?

Jeff: Very slowly. The songs on Over The Overlords were written and recorded over a number of months and maybe even a couple of years. At one point in the process we owed the studio a lot of money so we put things on hold until we could get enough money to start recording again, the writing of the album took some time too. Some of the songs were written a couple of years ago – and then some of them like ‘Farewell to Arms’ were written very recently. Some of them will never be played live. Songs like ‘Suicide Bomb’ will never be played out ’live’ because it has too many studio effects on it to ever pull off live.

E&D: What has the reaction to the new album been like so far?

Jeff: We are getting very good reaction to the new album; Most of the old fans love it and we have gotten a lot of texts and emails from a newer audience that tell us that they like it too. All of the vinyl sold out pre-release and that was quite a few copies.

E&D: The band’s bassist Pierre Kedzy sadly passed away last year. Did you want this album to be a fitting tribute to him?

Jeff: It’s not a true tribute to him because no one album is huge enough to encompass all of the things that Pierre meant to the band. That would take a box set. But Pierre wrote two of the songs on the album, and he did get to play on the album as well. I think that it was important that he got to contribute to it. He is such a great songwriter.

E&D: What are your favourite memories of Pierre?

Jeff: When we were on a European tour, he made us take pictures of us all crossing the Seine river. It was something symbolic. I will also never forget the hilarious poker nights that our manager hosted at his house. He earned the name ‘No Max Kezdy’ because of his reckless betting style. He was larger than life.

E&D: How exciting has been to release this album so many years after your last album?

Jeff: I’m not going to lie…it feels good. To know that we still have some relevant song writing in us, and also that our music is good enough to hold up against our previous albums, it’s very exciting.

E&D: What subjects do the songs on Over the Overlords deal with?

Jeff: The album deals with a number of different issues… gun control, the blind faith in those who are supposed to lead you, then twist that faith into a means of self-destruction. Also, the songs deal with simply wanting to lie in the ‘Good Times’, a time maybe more simpler and remembered fondly albeit unreachable on so many levels.

E&D: How has it even working with Wax Trax on bringing the album out and do you have a long relationship with the label?

Jeff: Wax Trax has been wonderful to deal with. They have been very accommodating and understand the bands’ intent, purpose and historical relevance.

E&D: Have you got plans for touring Over the Overlords once things start opening again?

Jeff: Maybe, if I can get feeling better. I have been battling Parkinson’s Disease for 19 years and sometimes I’m winning and sometimes I’m losing but if I can get it a little better under control, I would love to do some touring again. We will start out playing a few local shows and see how it goes. Then we’ll book some additional shows as we see fit.

E&D: What have been some of the most memorable live shows that Naked Raygun have played over the years and what made them so memorable?

Jeff: Well playing the larger shows is always a trip. When we played with the Foo Fighters at Wrigley Field (home of the Chicago Cubs professional baseball team) that was pretty rememberable. We also have got to play with a number of bands that we are big fans of including Bauhaus, Stiff Little Fingers, Black Flag, Public. Enemy, Joan Jett, Cheap Trick, The Descendants and many others. Also, we were fortunate enough to have Jake Burns of Stiff Little Fingers move to Chicago and play a song live with us. Steve Diggle from The Buzzcocks played a song with in London as did Charlie Harper frorn the UK Subs. These are all memories that I’lll cherish forever.

E&D: What touring experiences have been highlights for you?

Jeff: Travelling for 22 hours straight to play in Newport, Wales. The show the night before was in Munich, Germany. Check that out on the map sometime.

E&D: What is the Chicago punk and hardcore scene like today and which bands would you recommend for us to check out?

Jeff: I am rather out of touch with the punk and hardcore scene in Chicago at the moment. I have moved 2 hours west of Chicago. I’m actually closer to Iowa (the next state to the west) than I am to Chicago.

E&D: What bands sum up Chicago music for you?

Jeff: When I think of Chicago music I think of bands like The Effigies, Smashing Pumpkins, Smoking Popes, Pegboy and Alkaline Trio. These are bands that put in the time to be deserved of representing Chicago because they have put in the time and energy and show some depth, both on their songwriting and live shows.

E&D: What are some of your memories of the early days of Naked Raygun and the Chicago scene around that time?

Jeff: I just remember that we had a bunch of songs that sounded like screaming and were very basic songs – as far as songwriting is concerned. The early scene was very small and unified. Everybody went to see every show. It was a small scene where you knew everyone … at least knew them by looks. The scene was big into punk discos, not bands ..the bands came later.

E&D: What are your favourite  punk and hardcore albums of all time?

E&D: Dave Grohl is famously a big fan of Naked Raygun and you were the first live show he ever saw. How was the experience of playing with Dave and Foo Fighters years later?

Jeff: Pretty surreal. They play to huge crowds and such a loyal following. Dave and the band couldn’t be nicer people.

E&D: How was the experience of playing with Big Black and do you look back on your time with the band with fondness?

Jeff: Yes, I do look back at it with a lot of pride. Big Black turned out to be huge after I left them ..lol…. I can remember Steve (Albini) tossing a long string of firecrackers onto the stage before every set. The band would start up just as the last one was exploding. So you had the smell of gunpowder in the air .. that with the smoke .. made for a  great entrance.

E&D: What have been some of your proudest moments in Naked Raygun so far?

Jeff: Writing the songs ‘Peacemaker’, ‘Home of the Brave’, ‘Entrapment’ and ‘Suicide Bomb’. Playing in the UK and Europe, being mentioned on the cover of Wire’s album when they reformed as if someone would actually buy the album because we endorsed Wire. Playing in San Francisco with guys from Thrasher and Jello Biafra in the crowd. Having that random kid come up to me and say how important the band is and that we were the soundtrack to their youth or that we somehow made things bearable during their tumultuous adolescent years. To name a few.