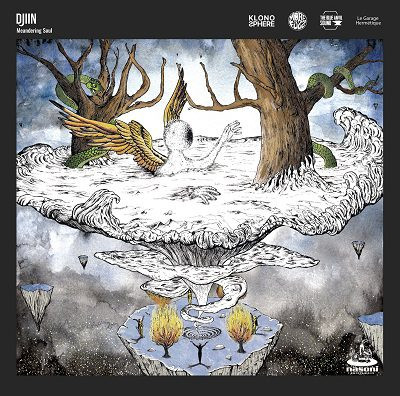 From the moment the opener ‘Black Circus’ starts the album off, you are sent into this whirlpool of hypnotic terror from the mind of French metal band, Djiin. Launched back in 2015 in Rennes, the capital city of Brittany, North-West France, Djiin are a four-piece band following in the footsteps of Jess and the Ancient Ones, Blood Ceremony, Rosalie Cunningham, and a dooming approach of French prog bands, Ange and MAGMA.

Their latest release Meandering Soul, a follow-up to their 2019 release of The Freak, is a conceptual story about a tortured soul who is being through these various trips where he or she meets these odd characters and surround themselves in dark and cold landscapes that’ll shiver your spine.

Like something straight out of the surreal 1970s spaghetti midnight western of Alejandro Jordorowsky’s El Topo and stories from the adult illustrated fantasy magazine Heavy Metal (Métal hurlant), Djiin get down to business when it comes to bring these terrifying gothic tales to life.

‘Warmth of Death’ becomes this tribal percussion and bass groove as it turns itself into a psychedelic middle-eastern arrangement. Once the nightmare happens, there’s no turning back. Chloe transforms her vocals styles into Catherine Ribeiro from the Paix years while the rhythm section brings out this massive bloodbath, channeling a heavier approach of Eloy’s Inside-era.

Not only Chloé has these mesmerising vocal styles, but she can turn herself into a blood-thirsty beast when she shrieks like a banshee. I can hear aspects of Christian Vander in her voice. From ‘Stoah’ to an alternate version of Mëkanïk Dëstruktïẁ Kömmandöh, it is evidential in the last 53 seconds of a brutal wake-up call on ‘The Void’, and the terrorising Carnival of Souls vibe of the ‘White Valley.’

Let’s go back to ‘Black Circus’ for a moment. There’s a brief section in the song where it becomes a nod to Jacula’s Tardo Pede in Magiam Versus. Like something straight out of ‘U.F.D.E.M.’, it is a knock-out for Chloe to unleash more of her inner demon by becoming a crossover of The Savage Rose’s Annisette Koppel and Circus 2000’s Silvana Aliotta.

In ‘Waxdoll’, Tom lets it all out by unveiling these massive machine guns underneath his instrument. He brings out the heavy riffs and gunfire by becoming this full throttling attack for Chloe as she becomes a conductor, giving the band to come back home with some nod to the Moving Pictures-era of Rush with a ‘Rhapsody in Blue’ twist until the very end.

This is how doom, metal, psych, and prog should be. It blends well together. I had no idea on what I was about to expect when I put my earphones on, listening to Meandering Soul from start to finish. And after I had finished the album in its entirety, I was transfixed.

It brings you to the Sabbath, to the event, and to a night you’ll never forget. Meandering Soul isn’t just a great album, but an indomitable release that Djiin have brought to the kitchen table with a lot of brilliant results.