Just one day remains before Barcelona is to host the triumphant return of the sweet, heavy and blissful sounds of AMFest. After a bitter couple of years in which organisers were constrained to host a reduced format of the festival, 2022 will finally be making a triumphant return with a four-day edition featuring a most colorful lineup of 29 top-grade acts to discover and experience.

Whether you’re a meticulous kind of person prone to skimming through every act on the bill ahead of time or a spontaneous mind whose thirst for discovery is led by intuition, AMFest will be sure to deliver some memorable surprises to experience and muse over for years to come.

Amongst our personal recommendations, we kindly nudge you to keep an eye out for the mind-bending trip that is Oranssi Pazuzu’s take on Psychedelia-infused Black Metal. Doom Metal powerhouse Pallbearer will also be presenting their widely acclaimed fourth record Forgotten Days, a long-awaited live debut for an album aptly described as “Perhaps the best doom metal album of 2020” by Consequence of Sound.

On Friday, we’re eagerly waiting for a bone-chilling, genre-bending rendition of GGGOLDDD’s This Shame Should Not Be Mine, a record melding industrial electronic textures with cathartic post-metal builds and gorgeous harmonies by vocalist Milena Eva. At 10:15 pm, no excuses will justify missing out on tricot, one of Japan’s very finest live exports, whose return to the European continent will probably become less likely in light of rising travelling costs for live bands.

“We expect AMFest to be more exciting than ever, with people being able to finally enjoy a proper event after two years of restrictions and the most amazing lineup we’ve ever been able to have. We have the challenges of a new venue to work at and probably some rust after this hiatus but we are sure everything will be fine and people will have the time of their lives together with us enjoying so many great bands.” Mau Barba, Organiser.

Saturday will be hosting a hefty set of international acts, including Anna Von Hausswolff and Lingua Ignota, closing off with a brutal electronic onslaught courtesy of France’s retrowave superstar Carpenter Brut, followed by a very special collaborative set by local Za! and German trio 13 Year Cicada, two zany, unclassifiable acts whose meeting will most likely culminate with the formation of a black hole.

As for Sunday, the best advice we can give you will be to start your day with a copious serving of Barcelona’s exquisite cuisine to keep up with all of the bands you’re definitely not going to want to miss, from the gritty, noisy drones by Tashi Dorji to the headlining set by Canada’s almighty Godspeed You! Black Emperor.

Lucky ticket-holders best brace themselves for the heavy half-week ahead of them. Four-day passes are officially sold out, though you might be able to snag yourselves a few day-tickets for a wild last-minute trip you won’t forget. Tickets are running low, so make haste!

AMFest: Barcelona will be held at La Farga de l’Hospitalet, Barcelona, from October 6–9 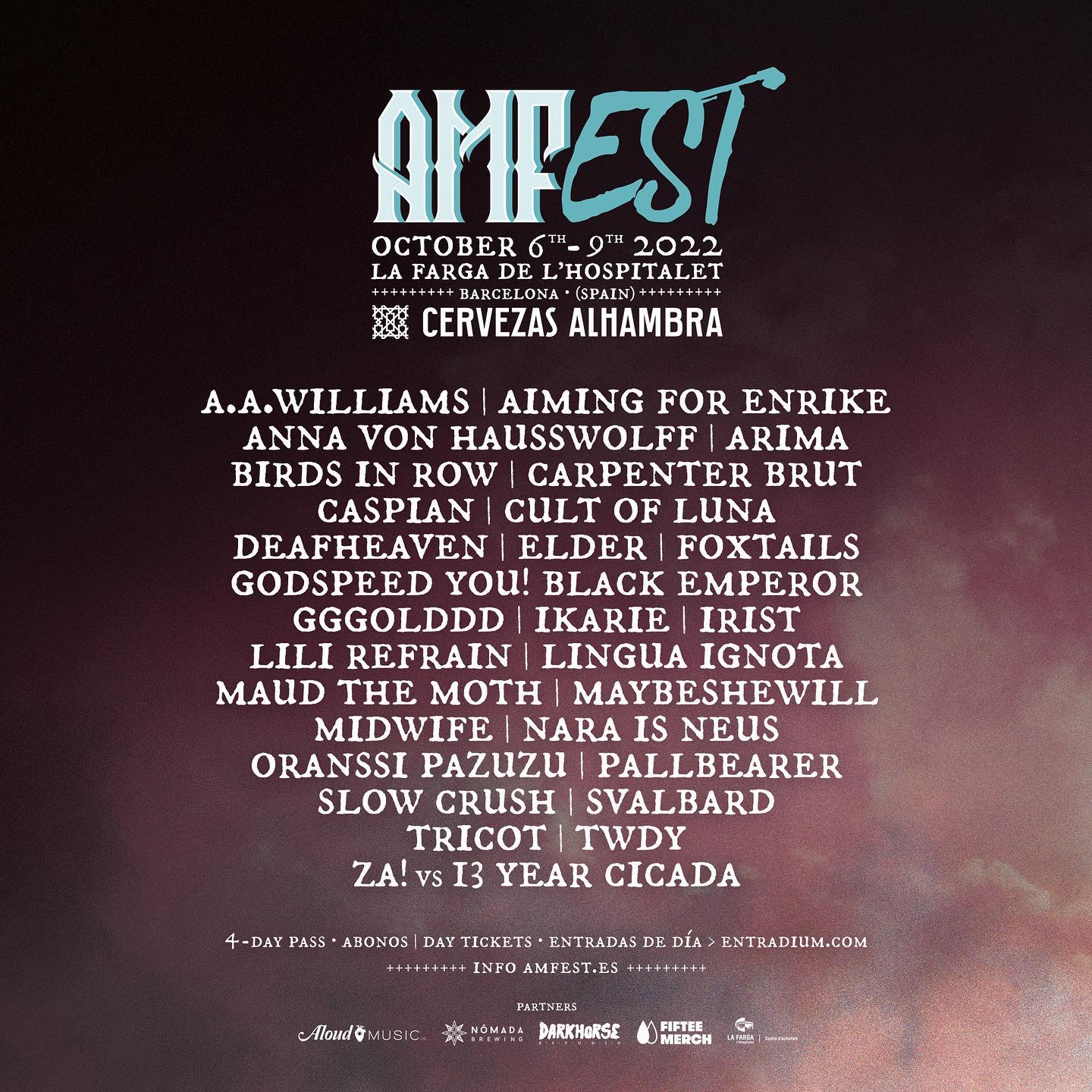