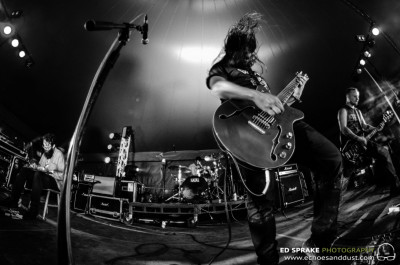 We keep getting better and better offers, we would have never thought we would get to play ArcTanGent and then suddenly we got asked to play. To be able to do this seems mad. We started the band a little more than a year ago, so to be here now is like insane and to have the reception and people seem to enjoy it, which is well, good!

Manchester-based four-piece band Pijn are a band that are difficult to catagorise. Somewhere in the realm between post-rock and post-metal with a whole raft of things in between. Self-confessed metal-heads at heart Pijn collaborate with a wide variety of musicians to create a sound that ranges from quiet and serene to brutal heavy and noisy. Despite a relatively small recorded output the band have made a name for themselves by playing dynamic and creative live shows. Jody Dunstan spoke to the band before their set at ArcTanGent 2017 in Bristol, UK.

E&D: So first of all I wanted to talk about some of your recorded stuff, what is your inspiration for it? It’s dark, kinda chaotic and nasty in places, what’s behind it all?

Pijn: (band look at each other) Well, that’s something that we don’t tend to talk about. Really, which I know is a bit awkward. It’s one of those things where we aren’t comfortable talking about. Everyone else (in the band) knows, but as we write more together it’s kind of drawing on everyone’s common experiences and stuff that is deeply personal and it’s finding a way to translate some really horrible stuff.

E&D: Is it quite cathartic getting all that stuff down?

Pijn: Yeah, totally, I’ve pared it down, but if it was up to me I’d write the saddest shit, all the time. Yeah, well we pull each other in different directions, me and Joe when we’re writing, he can steer more towards the happy end of things and we end up somewhere left of centre, and, well still pretty miserable.

E&D: The one thing I do notice is the dynamic in the music, it can go from quiet to absolute and total carnage… how do you capture that intensity and get it down on a record?

Pijn: Well….generally it’s recorded live. There are a few things that are overdubbed, when we started out we were just playing it in a practice room and it builds naturally. A lot of the time, because I [Joe] record it as well, if I am working with another band they might want it to be rigid and to a click but for us it has to be drifting, it has to feel like, human. Sometimes you pull back on something because you are thinking too much and things like that I really like in our recording, the slightly, you know, janky kind of things. Well, we’re not proficient enough musicians to be perfect

E&D: There does seem to be an expectation that everything on record has to be nice and polished and it’s nice that you guys have gone away from that and are able to capture that ‘live’ feel.

Pijn: Well, we obviously want it to be good, we don’t want any bum notes, if anything we need to push the dynamic a bit, the quiet bits to be quieter and the load bits to be louder and the long bits to be even longer!

E&D: So, do you have something lined up next project-wise or you just touring?

Pijn: Yeah, sure, well we’ve only played one song from the EP because it was a long time ago and we’ve been writing constantly and getting to a place where we should probably piece this together, we have been writing with the mind of doing an album but that is quite an endeavour and we want there to be loads of stuff and to be able to whittle it down. So that is what we are concentrating on at the moment.

E&D: Will it be different that the EP or in a similar vein?

Pijn: Yeah, it will be in a similar vein because the same people are writing it, so it will sounds like the same band but there were like, ten people on the EP and there could be another ten people that could be completely different who might want to contribute something, that’s the thing, we put out a call to arms, ‘who wants to play on our record?’

E&D: So the whole thing is quite organic then?

Pijn: When Paddy (lap steel) joined the band Joe (guitars) just basically put out a Facebook post, saying we’re making something, before we actually knew what the band was. He was like, well I can play this and sent us a phone recording of a lap steel and we were like ‘Yes, let’s put that on everything!’

E&D: What keeps you doing stuff like this, you’re a bit niche and on the edge a bit?

Pijn: Well, we keep getting better and better offers, we would have never thought we would get to play ArcTanGent and then suddenly we got asked to play. To be able to do this seems mad. We started the band a little more than a year ago, so to be here now is like insane and to have the reception and people seem to enjoy it, which is well, good!

E&D: One thing I do have to ask is the name?

Pijn: Well, it looks nice written down and we couldn’t say ‘peen’ so we had to make….

E&D:: Well, it was the metal editor for the site…

Pijn: Well, we get it all the time, constantly. We probably should of changed the name but we’re stuck with it now, everyone thinks we’re called pigeon. Well, I like that it’s difficult and awkward.

E&D: So, talking about the future, what are your hopes and dreams?

Pijn: Never Mind The Buzzcocks! Yeah, they’ll bring it back just for Luke to go on there.

Well seriously, we made a list when we were starting; basically, the top of the list was playing ArcTanGent. I have always had this pipe dream of maybe one day I will get to play in another country and you know maybe one day I will be on record in Piccadilly Records in Manchester. Well that’s pretty much achieved now, so, what can I do? It is hard to know what to do next, maybe just play more.

We should just go and play and many and weird and wonderful places. We were just on a three week tour with Gust, it was nice just to be asked because we would never thought we’d be asked to go. We were in Serbia, Croatia, not so far flung so now we need to go even further. We’ve got lots of cool stuff lined up in the next few months the Brontide farewell tour will be amazing. And then we have more European shows and the line-up is really based around the ArcTanGent vibes as well, Including Spoiwo (which have a worst name than us!)

E&D: So, you mentioned a couple of bands, but who should we be looking out for?

Pijn: Well, Spoiwo. Anyone else….er, well I am going to mention Paramore, it’s the finest album of the year. This isn’t even ironic, it’s a genuinely a good pop record. In terms of Manchester stuff you have Mums who are really good. And Earth Moves. If you like Metallica and Slayer, Exxxekutioner from Manchester, they’re fucking great, with 3 x’s and a K. We should give a shout out to Wren as well, they’re amazing, out label mates. Well everyone on Holy Roar is good, obviously.

E&D: There is a lot of good stuff coming out of there.

Pijn: Yeah, Conjurer, like there album is going to slay. Errr, like Glarus, that is a post-metal type thing, sounds kind of like Breach and yeah Big Machine.

We’ve played with a load of really cool and diverse bands Our tour was with a big DBE (?) sort of crusty band from Sweden and playing with those guys every night. That’s Gust, from Sweden, which is pirate hardcore!

Pijn: Yeah they love it when you say it, so you should definitely put that in.

E&D: What is pirate hardcore?

E&D: And there is always one question to ask, what is your favorite biscuit?

Pijn: Oooh, strong question! Well I like a custard cream. With a nice cup of tea… can I have tea with it?

Pijn: Well in that case a chocolate hobnob.

Well hang on, what is your favourite?

Pijn: Ah, that’s a strong one. You can get the ones with caramel in.

Pijn: Shit, that’s like saying your favourite band is Coldplay!

E&D: Right, on that note, thanks very much for your time and enjoy the rest of the weekend.

Pijn: Sure, thanks, enjoy!