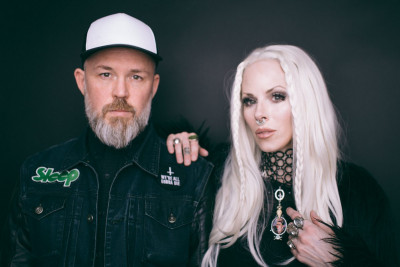 We both feel that this is an exciting time for music. We seem to find new bands on a regular basis that inspire us. There is so many good bands out there.

At the beginning of April Frayle came out of nowhere with the release of their debut EP called The White Witch, which they released on their Bandcamp page. Almost instantly Désirée from Lay Bare Recordings reached out to the band to get the rights to release this on vinyl, which will happen very soon. Sander van den Driesche caught up with Gwyn Strang and Sean Bilovecky, the duo behind Frayle to find out more.

E&D: You’re a relatively new band. Can you briefly give us a history of the band?

Sean: We met a few years ago, but really didn’t start thinking about music until late last year. Gwyn gave me a copy of Logic for the holidays (I had always been a Pro Tools guy), and it seemed to spark something that had been laying dormant for years. In 2000 I was in a band (Disengage) signed to the legendary “stoner rock” label Man’s Ruin, but after leaving the band in 2007, I got much more into engineering than I did playing or writing.

Gwyn was in a garage band that never made it out of the garage in her 20’s. She took vocal lessons a few years ago, but stopped when she decided she probably wouldn’t sing again. I basically forced her to sing again. She would make me go all the way downstairs when she first started recording. Slowly I was allowed back into the same room.  Now Gwyn sings in the car while I’m driving. It’s worked out quite well.

E&D: I think your music has elements of doom, rock and even shoegaze, but how would you describe your music?

Sean: We like to call it heavy witch rock. I think that our songs have elements of doom, stoner rock, etc, but there is more happening. There are nods to trip-hop, etc.

E&D: You’ve released a 4-track EP recently called The White Witch, which will see a vinyl release through Lay Bare Recordings soon. How did this come about?

Sean: Désirée from Lay Bare reached out to us a few days after we released the EP digitally on Bandcamp. We were immediately impressed with her passion and how professional she was. We feel very fortunate and are really excited to be working with her. We’re in communication with her on a daily basis regarding the release and we’re working on getting over to Europe. She really knows what she’s doing.

E&D: How does Frayle write the music? Is it a collaborative approach or does one of you two do the writing?

Gwyn: Our songs typically start with Sean writing a verse/chorus combo on guitar, bass, and drums. We are very fortunate to have a “professional” recording studio on the third floor of our house. Sometimes those initial riffs end up as the final version, and other times he will spend days trying to get a specific guitar tone that he has in his head.

I’m constantly writing lyrics in my phone. Usually the first or second time I hear one of Sean’s riffs, I come up with a short vocal melody. Then we get together and compare notes. Normally, we like what the other person has done… There are those rare occasions that one of us is just like “Nope, you need to try that again.”

E&D: You covered Portishead’s ‘Wandering Star’. Is there a specific reason you covered this song?

Gwyn: Portishead was a huge influence on me, and that particular song became a touchstone during rough times.

E&D: I really like your cover of ‘Wandering Star’ as you have made the version your own, it has your own style and it isn’t an exact copy of the original. What do you think makes a cover of an already existing song any good and worthwhile?

Sean: We prefer covers that are not just copies. A cover song is an opportunity to blend your own voice with that of another artist that you admire, or a song that moves you. We went through several versions of the chorus until we found one that really felt like us. ‘Wandering Star’ was actually one of the first songs we ever recorded together. It was great exercise in helping us to refine our sound. We both know that song inside and out. So we asked ourselves “what can we do differently?” We cut the verse riff in half, slowed it down, and then changed it completely for the chorus.

Ironically, the very first song we recorded together was another cover. We did ‘Problems’ by the late Lil Peep. We might release that one someday…

E&D: Are there any other covers out there that really stayed with you?

Sean: Gwyn and I really like Ministry’s cover of ‘Lay Lady Lay’. That song really gets to us. I think the Deftones’ cover of ‘Savory’ is great. We also like some more “mainstream” covers like Orgy’s version of ‘Blue Monday’. Also pretty much every cover that Cat Power has done…  especially ‘Wild is the Wind’.

E&D: Are there any plans for us Europeans to see you live sometime soon?

Sean: We are working as hard as we can to make this happen. We’re starting to show up on the radar of some of the festivals. We’re really hoping to get over there this Fall.

E&D: What does Frayle have in the pipeline? Can we expect a full-length album soon?

Sean: We have the musical bones for 20 or so songs that we believe to be “record worthy”. We’re working to narrow those down to 12 (or so) to complete and record. So far the tracks are turning out to be an elevated version of The White Witch EP. Heavier, spookier, and more depth. We’re both stoked on how heavy the tones are getting. We will have a full length ready to deliver by mid July.

E&D: Lastly, if you had to compare Frayle to a type of food or a particular dish, what would that be and why?

Sean: Steak with a bourbon sauce and whipped cream. We’re not going to say why…

E&D: Is there anything you would like to add?

Sean: We both feel that this is an exciting time for music. We seem to find new bands on a regular basis that inspire us. There is so many good bands out there. Hopefully we can join them (all) on tour soon… Also duets. We’re gonna knock a duet out of the park one day…