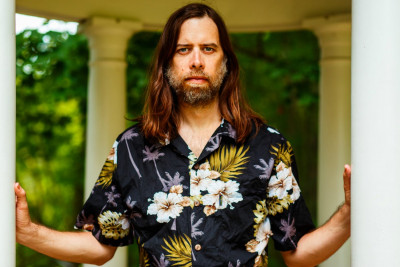 Shortly before they released their most recent album Let It All In, our Editor In Chief Dan Salter had to chance to catch up with Dave Heumann of Arbouretum.

(((o))): Hey Dave, can you believe it’s been 8 years since we last interviewed you guys? Crazy how the time flies.

Dave Heumann: Indeed. All these years go by and it’s still right now. Can’t ever outrun it.

(((o))): It’s been three years since Song of the Rose, what have you guys been up to, writing the new record aside?

DH: Everyone’s got these different projects and things. Brian and Matt have businesses in the bar/restaurant scene, I’ve been selling Chinese teas and teaching guitar and a bit of Tai Chi, Corey’s been working at a library…and also David Bergander rejoined the band after like 15 years, so we have two drummers now.

(((o))): Let It All In is a tremendous record, personally my favorite Arbouretum album since The Gathering. Has anything changed in the way you’ve approached this record compared to others?

DH: Thanks for that; The Gathering was such an enjoyable record to make and one that often gets picked as a favorite by people I trust, so I’m glad you mentioned it.

One thing that stuck out to me while recording this one was just how laid back everything was. There were zero weird vibes or tense moments; everyone was really valuing everyone else’s input, and the ideas flowed freely and easily.

I really enjoyed seeing Brian and David working out the drum arrangements and figuring out how to best put the parts down. And for ‘High Water Song’, Matthew came up with this horn arrangement – I think it was 16 separate lines total, that were played by himself on baritone and tenor saxes, and Dave Ballou on trumpet and flugelhorn. This was the first time we’d done anything like it.

(((o))): The title track particularly is absolutely transcendent. How do you even begin to write an epic like that?

DH: That one came about because of this jam we just started doing at rehearsal. We played it for months hoping it would turn into a song on its own, and it didn’t, but we did come up with a way of playing it and liked what we were doing enough to keep at it. I think we were calling it “Uptempo jam in E” on the recordings we’d made in the practice space.

So then at home one time, I was just thinking of the feel of it and started imagining, if there were a vocal part on this and chords and everything, what would that be like? So that’s how the body of the song came about. I knew from pretty early on that it should be called ‘Let It All In’, and explored a few different lyrical angles before going with the approach I settled on, and Rob Wilson came by one day and helped me flesh out some of the lyrics.

(((o))): Once again, many of the songs on the album seem to have something of a narrative to them, where do you find inspiration for the stories you tell?

DH: Different places. Books, news stories, Wikipedia, but mostly imagination. Just letting a “what if” scenario run its course. There was a point in which I’d gotten obsessed with rivers in the United States- where they actually sprang from when you traced them all the way back. So I did some research on the sources of the Mississippi and Colorado rivers and became fairly engrossed in that. Then I read a fantastic book called “The Encounter – Amazon Beaming”, which among other things, dealt with a search to find the headwaters of the Amazon River. I tied all this in with ideas about time, memory, and creation, and this became the basis for our song, ‘Headwaters II’.

(((o))): Over the last few years as well as Arbouretum albums you’ve released a solo album, an EP & a few odd tracks as well as the Heumann Homan Highway stuff. When you come up with an idea how do you decide ‘yeah, that’s an Arbouretum thing’ or ‘no, I’ll keep that for me’?

DH: A lot of that is decided by personnel. With the Heumann Homan Highway stuff, it’s just Alex and myself. It lends itself inherently to improvising freely, which is something Arbouretum doesn’t really do…we allow for a lot of looseness, but it isn’t improvised music in the true sense. In HHH though, it’s very different by design.

Then there are things where I’m doing it more or less entirely by myself, like the ‘Fair and Tender Ladies/The French Girl’ single. In that case, I programmed the drums and played everything else, which is a very different process than saying to the band, “Here are the chords; let’s see what kind of arrangement we come up with”. With the solo record I did, Here in the Deep, that was still a collaborative process because other people played on it, but the material was for the most part material I wouldn’t have introduced to Arbouretum because the songs seemed to stray outside of what we considered to be the “band personality”. The exception to this was the song ‘Ends of the Earth’, which was actually played by Arbouretum on the record and has been played by us live many times since.

(((o))): Listening to your records is a very calming, centreing experience, I find. Is that a vibe you consciously aim for or is that just the way it comes out?

DH: I think that’s just the way it comes out. We’re just happy if we can find songs to play that sound good to us and feel authentic. Really, we’d like to play music that makes people want to move. More often than not, that kind of movement is just a gentle swaying, but we’ll take what we can get.

(((o))): The music world has changed a lot since we last spoke in 2012. How, if at all, has the rise of Spotify & other streaming platforms changed the way you approach being in a band? Do you think it has made things easier or harder?

DH: I think it’s easier to get people to listen to us, since a lot of people use it or other streaming platforms. It certainly would be nice if it paid better, of course. I don’t know, in our situation, if it has made things easier or harder, because there are so many other factors involved, like how often we tour, whether it’s endorsed by certain tastemakers, or simply just what audiences want to hear.

(((o))): Another artist recently told us that they had started rethinking the length of their song intros due to the “skip factor”; is that something that would even enter your minds when writing a record?

DH: Not really; in fact this is the first I’ve heard of a “skip factor”. Makes sense it exists though.

DH: Really just with the material itself. We’re continually redefining what an “Arbouretum sound” can encompass and what it means to us, so that helps keeps things from getting boring I suppose. We also sometimes evolve the ways we play older material live, and not always on purpose; the songs just sort of shift over time. A version of ‘Pale Rider Blues’ played in 2019, for example, might differ a lot from a version played in 2009.

(((o))): If you had to pick 3 records that have most influenced the music of Arbouretum, what would they be & why?

DH: I’ve been struggling with this question and I can’t, sorry!

(((o))): With the new record coming out will you be going on tour to support it & if so, when can we expect to see you back in the UK?

DH: We’re looking at going to the UK and Europe in September. In many ways I wish it could be sooner, but that just wasn’t in the cards for us this year. I hope this just means that audiences will be good and warmed up by then.