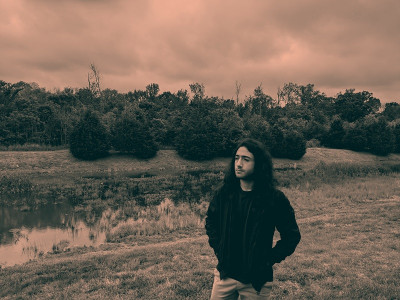 Our advice as a collective is to be open to the idea that this might be different than a band. A collective can be a loose concept, so have room for flexibility, mutual understanding between everyone involved, be patient and willing to invest time and resources for the creative output. Know what you want to contribute to and find the balance between this and any other bands or set projects you’re involved in.

miserable.noise.club is an international experimental collective based in Charlotte, North Carolina, U.S., Guangzhou, China and Amman, Jordan. I first found out about the collective when working on their Under the Influence piece last year. I admire musicians who manage to create incredible music from afar. It shows determination and imagination. They also just released an EP titled Dead Flower Effigy. It’s an ambient, beat-driven sound exploration that creates an atmosphere of suspense and adventure.

E&D: Can you tell us about miserable.noise.club.? How did the experimental musical collective get started and who is part of the collective?

There are seven members and/or contributors as of now. Myself, Mark Lee, Left, W J, Zhan Hua, Neon and Shaher Majali.

It started in the States around 2012. I’d recorded a few tracks and was doing a couple of shows in North Carolina. The following year I relocated to China for collaborations and other music-related work. So I kinda sat on it for a while. A few years later I got invited to perform at an event in Guangzhou. I got in touch with W J from If Signifying, and he recommended Left from Lèng to join us. Soon after that performance, Left recommended Mark Lee, producer and owner of Royal City studios. He also teaches at the Xinghai Conservatory of Music in Guangzhou. Neon and Zhan Hau joined for a performance the following summer. I recently got in touch with Shaher Majali in Amman, Jordan. We’re long-time friends and we performed together in Desperar over a decade ago.

E&D: Since you are living in different parts of the world, can you tell us about the writing process?

It’s a bit difficult and more complicated than what it seems. Not much is done remotely (as a collective) since we’re spread out and we all have other bands and projects to contribute to as well. We write and record whenever any of us are together. Everybody can choose any instrument, play it however they feel suitable, and contribute to the sound and recording process with an idea or suggestion.

Most tracks on Frost Confinement were recorded in the U.S., Given To Heartache, excerpts.shards.petals and Dust Coated Departure in China. Thoughts On The Impasse in Lebanon and all recordings from Live at Abajur onward were done in Jordan.

E&D: When you play live shows, do all of you get together or only part of the group plays? How does that work?

Between other projects, work, personal lives and location differences, it’s difficult for everyone to rendezvous for an event. It’s usually two to three members recording and performing live depending on which continent we are. That’s why quite a few of our releases are live recordings. We do it on the spot. We barely rehearse, and most of our performances are improvised.

E&D: What’s the best thing about being part of a collective and the worst thing? Is it all good? What advice can you give to others who are thinking of starting a collective?

Nothing particularly bad, but good aspects are flexibility and diversity in sound. We don’t have a specific genre, we’re an experimental group, and we value creating new soundscapes and atmospheres, but not necessarily for the sake of experimentation. Throughout our discography, you’ll hear Noise-rock, Post-metal, Ambient, Drone, Dub and even Techno. As random as it seems, everything is structured and presented with a calculated and predetermined audible purpose.

We do this independently, without restrictions on the creative output, any obligation to go on tours and release albums. All of our releases are available for free streaming and download.

Our advice as a collective is to be open to the idea that this might be different than a band. A collective can be a loose concept, so have room for flexibility, mutual understanding between everyone involved, be patient and willing to invest time and resources for the creative output. Know what you want to contribute to and find the balance between this and any other bands or set projects you’re involved in.

E&D: In a lot of the live show photos I’ve seen of the band, I also see visuals playing in behind the band. Would you say that visuals play an integral part in both the live experience and when composing?

Definitely. It’s integral and important to our live performances especially since we’re instrumental. Each track has a specifically curated accompanying video or visual that relates to the themes and emotions that we’re trying to convey. Not sure about the other members, but I usually get nervous at the beginning of sets. I take comfort in knowing that the focus isn’t entirely on us while on stage.

E&D: What artist or artists have inspired each of you and your music and to play instrumental music?

I will group our mutual influences in the list here.

Film is important to us as well, main influences are the works of Sion Sono, Terrance Malick, Kiyoshi Kurosawa, Hong-jin Ma, Michael Mann, Johnnie To, Hirokazu Koreeda and Sung-il Jung to name a few.

E&D: In September of last year, we put together an Under the Influence piece with the collective. In it, I mentioned that you were preparing for a short tour in East Asia and the UK beginning in early 2020. I did not hear news of the tour and so I am assuming COVID-19 had something to do with it. Are you considering to reschedule the tour once things get better? Have you considered live-streaming as an option?

I went on a solo tour in December passing by Japan and South Korea, did a show in Tokyo, and a couple in Seoul. Afterwards I went to London but it was around Christmas / New Year’s so I couldn’t find a place with an open slot to perform. No events were scheduled since then.
We would love to do another short tour with more members of the collective, hopefully, come back to London, Tokyo, Seoul and Europe eventually. But this will be on hold for now.

Live streaming is a great way for artists and audiences to keep connected and show their support for each other. But it’s a bit difficult for us due to our schedules and time-zone differences.

E&D: What can fans expect from the collective in the next twelve months?

We just released an entirely electronic / string-less EP called Dead Flower Effigy. It’s a mix of Drone, Ambient and Dark-techno. We are planning to release another reworked version of it with accompanying guitars. We previously performed some of these tracks live and you can find the clips on our YouTube channel. I think it’ll give a glimpse of how different our live performances are from album recordings with the addition of other instruments.

We have a collaboration with Korean musician and producer Rainbow99 (Ryu Seoung-hyun) coming up by the end of the year.

Plus a collection of singles and EPs that we’ll be putting out regularly on our Soundcloud and Bandcamp pages.

E&D: Lastly, is there a good book or album you’ve been reading/listening to?

I recently went through What I Talk About When I Talk About Running by Haruki Murakami, It’s a light, funny and interesting read about his interest and participation in long distant marathons and running in general.

I < 1H by Joseph K. (Taka Ishihara) is a beautiful blend of droney natural field recordings, improvised guitars and piano.
Plus the music of Violette Moth (Natsuki), which is an ethereal mix of dreamy folk and fuzzy guitars. You can find her tracks on Soundcloud.

Thank you so much for this interview and to everyone who went through it. We really appreciate it.