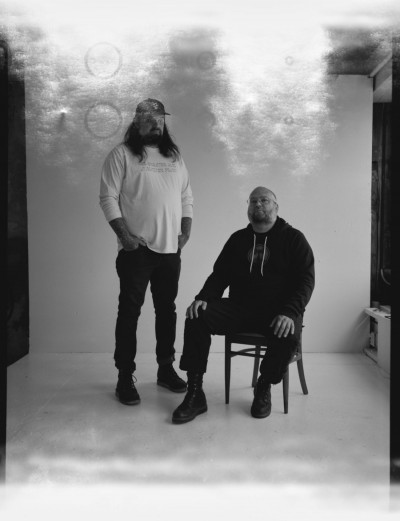 We wanted it to sound more like we do live, which is definitely more reliant on volume and distortion.

The Body have just released their immense and formidable new album I’ve Seen All I Need To See and it’s an unforgiving but hypnotising musical experience that sees the band delve even deeper into a bleak pit of harshness that is utterly compelling to listen to. Gavin Brown caught up with The Body drummer Lee Buford to hear all about I’ve Seen All I Need To See and how the album came together as well as their other recent release with MSC and collaborations with Uniform, Thou, Full Of Hell and others, touring memories, sonically inspiring live shows and what The Body have coming up in the future which continues their impressive output of releases.

E&D: Your new album I’ve Seen All I Need To See is out now. How did the creation and recording of the album go?

Lee: It went pretty smoothly. It was a different approach from our past couple of recording sessions where we really just relied on me and Chip mainly for the instrumentation and let Seth Manchester kinda go wild with achieving the crazy distortion on everything. We had to play in a different way to to let the distortion ring out so everything had to be played “less busy” as we normally play which is not very busy to begin with.

E&D: Did you want to use more live instruments and have more of a live sounding vibe instead of beats and samples from the get go on this record?

Lee: Yeah we wanted it to sound more like we do live, which is definitely more reliant on volume and distortion.

E&D: You work with vocalists Chrissy Wolpert and Ben Eberle on the album. How did you hook up with them and what do they bring to the sound of the album?

Lee: Me and Chrissy actually dated years ago and have remained best friends. Ben would come to shows in Providence when he was like 17 and we found out he played video games so we ended up having LAN parties playing Halo. They both bring a lot but in completely opposite ways. Chrissy has an academic background in music and Ben plays in like 5 one man black metal bands so Chrissy brings melodies and Ben brings more harshness.

E&D: You mentioned working again with Seth Manchester, who did the engineering of I’ve Seen All I Need To See. Is he a big part of how the record sounds and how was the experience of working with him?

Lee: He’s a huge part of the sound. Anyone who records at Machines With Magnets owes a lot to their sound to him, if they’re smart. me and him have very similar musical tastes and after working with us for so many years he knows what we’re gonna like or not like so it’s very easy to work with him.

E&D: The album was mastered In the UK by Matt Colton who has worked with Aphex Twin, New Order, Sunn O))) and SUMAC. How was it working with him and what did he bring to the sound of the record?

Lee: He’s really great. we were really concerned that no one would be able to handle the amount of distortion that was on there without cutting it a ton and he actually amplified it. He was the perfect person for the job.

E&D: Was making this record a cathartic experience for you at all?

Lee: I think making anything is cathartic. You and your friends set out to make something and when it’s done, it always feels good.

E&D: The levels of distortion on I’ve Seen All I Need To See are hypnotic. Did you explore what you could do with that on this record?

Lee: Yeah that was the main goal, to kind of get the fullness we normally get with overdubs and different guests but just using distortion and feedback.

E&D: Do you also think that you reached levels of bleakness with this record that you haven’t reached before and was that your intention when you were making it or did it work out that way?

Lee: We did, I don’t think that was really too intentional but it is very bleak. I think without the breaks of melody we usually get with strings or Chrissy singing, it’s just full on with no breaks.

E&D: You have released the song ‘A Lament’ from the album so far. How has this track gone down so far?

Lee: I think pretty good, I admittedly don’t keep up on a lot of social media stuff.

E&D: Will you be taking I’ve Seen All I Need To See on the road when it is possible and have you got any tentative live shows you can tell us about?

Lee: We will, whenever that may be. We don’t have anything coming up planned as of yet but who knows when things will be happening again.

E&D: How do you think the new material will translate in a live setting?

Lee: I think really well. That’s the most accurate representation of what we sound like live that we’ve ever been able to record so far.

E&D: Your collaborative album with MSC also came out recently. How was it making that record with MSC and how has it been received?

Lee: We’ve been friends with them for decades now so it was really easy. Zac plays drums overseas with us since I don’t fly so he’s basically a member of the band now anyways. I think people like it. We talk about giving it a proper release since it’s just on Bandcamp.

E&D: Your show at Supersonic Festival last year was stunning. How did it go for The Body?

Lee: I actually wasn’t there because I don’t fly but Chip and Zac loved it. They had a really great time. I was really jealous I couldn’t be there. It was a killer lineup.

E&D: How did Chip and Zac say the experience of performing live with The Bug in Russia last year went?

Lee: They said it was great. I love Kevin and everything he does musically. hopefully he’ll come over here in the future and we can properly hang.

E&D: How did that live collaboration happen and have you got any plans to work together in the future?

Lee: I think the promoter brought it up. We’ve talked about doing stuff together in the past so hopefully one day we can do it.

E&D: What has been the most sonically intense live show that you have ever experienced?

Lee: It’s tough to say, I saw Bjork on the Vespertine tour where she played with Matmos, the Boston Symphony and an Icelandic choir that was pretty crazy.

E&D: You were on tour with Uniform when the pandemic first hit. How did the tour go up to that point and what were some of the highlights?

Lee: The tour was great up until we had to cancel and head home. We were out with Dreamdecay and Foie Gras too so it was great seeing them everyday and also hanging out with them. We’re lucky to have had the last thing we did be so fun since who knows when we’ll be able to have that again.

E&D: How was the experience of working with Uniform on the Everything That Dies Someday Comes Back album?

Lee: It’s always great playing with them, we’re all really good friends so it’s always easy to work with them and even though we come from very similar backgrounds, we come at things different enough that it’s always interesting.

E&D: You’ve also worked extensively with Thou and Full Of Hell. How was it working with those bands and is there a chance of further collaborative work from you?

Lee: It’s great. We usually only do records with our friends so we always know it’s gonna be a good time hanging out at least. there’s no plans to do anything else but who knows, if we’re all in the same place together I’m sure we would.

E&D: Have you got any new music plans at all at the moment after this new album?

E&D: What have been some of your favourite albums you have been listening to throughout the past year?

E&D: What have been some of the proudest moments in your time with The Body?

Lee: I think whenever anyone is on the same page as us and gets what we’re doing is always great.