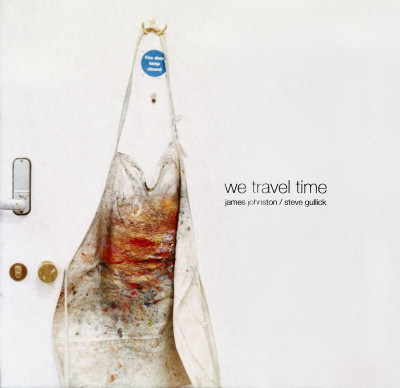 We Travel Time by James Johnston and Steve Gullick

It’s not unfair to see a name or two attached to a project and be able to reasonably tell what’s going to come from it. Not so here, with this offering from James Johnston and Steve Gullick. Coming from equal parts of Tenebrous Liar and Gallon Drunk, the casual observer might think that these protagonist’s leanings towards a fun sort of chaos, a slowcore grungey Gun Club sort of thing maybe. Not so, dear reader, for what unfolds here is something rather calm and beautiful. Which I guess presents a form of chaos in itself; to be honest it’s hard to tell just what embodies chaos nowadays.

This is exactly what I want to be hearing right now. When we are all stuck inside, We Travel Time goes beyond our doors and windows out to coasts and coves, waterways and woodland, homes from home. It begins with the dawnlit coastal washes of ‘First Light’, bringing gentle waves of overlapping violin thoughts and sparing piano ideas, along with birdsong drifting in through 2020’s warm open windows. This considered opening feeds into the rest of this record, feeling like an overarching whole instead of twelve individual tracks.

Given the patient gestation period of We Travel Time, it does sort of appear at the right time for an audience. As well as the obvious dreamlike nature feeding all our current, desperate escapist desires, it occasionally skirts the current vogue for sea shanties, albeit in a manner more suited to the slow, intimate-theatrical nature of the murderous anecdotes of The Doomed Bird of Providence than any jolly notions of scrimshawing and the like. ‘Stormy Sea’ is the closest-related exponent of this, sparse guitar and chiming piano buried beneath a close-knit choir of voices considering their collective fate.

The beauty that runs throughout this album is a constant. ‘Seven Seas’ meanders through a song that reminds me of Joseph Arthur in the chorus and is a shining, breathtaking three and a half minutes of simple romance. The title track is brimming with so many wistful, carefree qualities that could be shared with Nick Drake at his most untroubled, and there is even a cover of Gullick’s band Tenebrous Liar’s own ‘John’ so changed from its downtuned original that only its title and lyrics give away its origin. I also look forward to receiving the vinyl version of this album, not just for the “well it’s just *insert spurious reason for format preference here*, isn’t it?” notion of it, but also so I can see if the vocals of ‘We Sail’ are actually backwards and I can ruin my needle by trying to find out.

Collaborations and collective works are a frequent staple of the music industry, coming from a whole host of reasons. Not knowing where one artist ends or when the other begins is a rare symbiosis of ideas that can only come of a long-standing friendship as is does here.  We Travel Time is not just a journey but a series of destinations which bring a sense of belonging to an outside world that can all too easily seem lost to us.