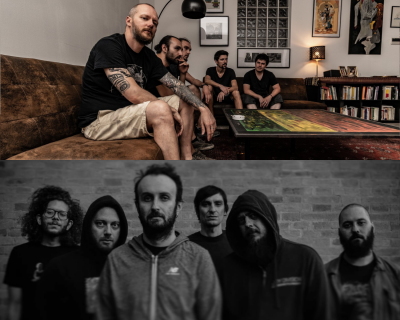 I can’t speak for the rest of the guys, but the way I look at it is that people who make the kind of music we make, don’t do it for money or fame. They make music because they have to, because they can’t not make music.

Yesterday, Italian post-rock/metal bands RIAH and POSTVORTA released their much-anticipated split album RIAHPSTVRT via Moment of Collapse Records, Shove Records, Fresh Outbreak Records and Trepanation Recordings. The record features one song per band plus a collaborative suite track. Band members, Diego Ruggeri (RIAH) and Mohammed Ashraf (POSTVORTA) kindly answered some questions via email for Echoes and Dust about the collaboration, how it came to be and more.

Diego: I met Andrea from POSTVORTA about ten years ago through mutual friends. Music brings people together when you have similar tastes and since then it happened to meet each other several times. I remember with pleasure that Andrea organized a small instrumental music festival and we participated when we were still a trio. It was an incredible evening and since that time we have always kept in touch. I met the other guys in the band at one of their gigs: an intense and rewarding show.

(((o))): What prompted the bands to join forces and put together the RIAH/POSTVORTA – RIAHPSTVRT split release?

Diego: It was my idea! Porrima is one of the records that impressed me most last year and given the forced stop of the live shows I thought I’d ask POSTVORTA to join forces to create something together. The guys were thrilled and it all started!

(((o))): Having written the album during the pandemic, what was the writing and recording process like?

Diego: Technology has helped a lot. We were literally located all over Italy from North to South. We shared the tracks of every instrument online and each of us worked at home on their part. It all started with my bassline and a harmonic progression by our guitarist Andrea. Moh from POSTVORTA added some synths and guitars and Lello added a beautiful harmonic line with the bass. All this within a few days! It was a challenging and very rewarding experience at the same time. For the ending of track, I came up with the idea of ​​placing an ambient microphone while my son was playing the piano in our remote cabin in the mountains where we spent the summer. I liked the result so much that I used it in the song! Furthermore, Riccardo Pasini’s (Studio 73 recordings) contribution to the recording was decisive: he managed to work on the monstrous amount of lines that compose the track in a masterly way. Finally, he recorded Nicola’s vocal parts and Matteo’s drums creating a perfect groove.

(((o))): In this release, both bands reveal new lineups. Can you tell us about the new members and how they became the newest members in each band?

Mohammed: Well this has been our lineup since we wrote and recorded our latest album, Porrima a couple of years ago now. The changes in our lineup compared to the album that preceded that, Carmentis, are Matteo on drums and myself on guitars and synths. Matteo joined us right as we were finalizing the tracks for Porrima and ready to start on the pre-production phase because our previous drummer left. He’s a long-time friend and bandmate of Nic’s from the band The End of Six Thousand Years, so he fit in straight away. I joined right as the guys had finished recording Carmentis. I had met Andrea while geeking out about pedals and gear on a Facebook group and we discovered that we both lived in the same place. When we met, our initial idea was to start an electronic music side project but then when I saw that they were looking for a new guitarist, I had to jump at that opportunity. I guess Siderael became our electronic project.

Diego: When Francesco decided to leave the band it was necessary to find a new guitarist. After a few auditions, we found ourselves in front of Andrea and Michele. They impressed us so much that we couldn’t decide who to exclude. We figured if bands we loved like *shels and Suffocate For Fuck Sake had three guitars, we could try too. Well, it was the best choice we could have made as a band. The song ‘Epidermide’ is just a taste of what we are writing now for the next album.

(((o))): Each band contributed a track and collaborated on one track. I’ve read that the collaborative track was inspired by an illustration which also happens to be the cover of the album. I have to say that the track has animated that illustration and creates incredible imagery while listening to it. It’s incredible. Can you tell us about the artist, how you stumbled upon the illustration and what from it inspired each band to compose music because of it?

Diego: I met Davide Brioschi last summer when he joined the team of Grind On The Road, the music zine that I manage together with other guys. I saw some of his works on Instagram (dbrio17) and asked him if he wanted to collaborate with us for the release of a split album. The first sketches of the owl that he showed me were a very strong inspiration for the song: the fierceness of the animal bearing its prey in its jaws literally bewitched me. I then imagined an alleged initial calm that anticipated the hunt and the inevitability of death in the finale. Even today I find incredible the spontaneity of the contributions of the musicians who have collaborated. Everyone understood how the track had to unfold without real indications, simply having the drawing as the only reference.

(((o))): With the pandemic raging on and limiting the opportunity to hold live gigs, do you plan on doing a live stream in support of the release?

Mohammed: That would’ve been great, unfortunately, given that both bands have members from different parts of Italy means that the current lockdown regulations make it impossible to get all eleven of us in the same town, let alone the same room. All we can do at the moment is hope that we could organize something once things have reopened.

(((o))): Now that you’ve collaborated, do you see yourselves collaborating even more in the future?

Mohammed: On the back of this collaboration, the guys from RIAH asked me to contribute some synths to a track off their upcoming album, so that’s already a start! The full band collaboration is something that I think both bands enjoyed and collaborations are often brilliant sources for inspiration and new ideas, so why not? That said, I personally would much rather do it in a rehearsal space or a studio than by sending files back and forth.

Diego: I hope so. With some of them there is already something in the pipeline (Ouch, Moh has already spoiled the news).

(((o))): What and who inspires each band to create and play music?

Mohammed: I can’t speak for the rest of the guys, but the way I look at it is that people who make the kind of music we make, don’t do it for money or fame. They make music because they have to, because they can’t not make music. It says a lot that as soon as the pandemic and lockdown became a reality, we turned to music as our first port of call to escape and process this reality and made Siderael Pt. 1 and most of part 2 (which is coming out soon). Also, we really like very loud guitars.

Diego: I listen to a lot of music of all kinds and I often find myself thinking that certain solutions I hear from other bands are interesting and that they could be extended or twisted to create something new. Creating music is an expressive urgency for me. Especially in these times.

(((o))): In many cities across the world it seems that support during this pandemic for the arts/music scene has mostly come from other artists/musicians and fans, people who themselves are experiencing tough times but still supporting their fellow bands/artists. It’s been incredible to see. What have you seen and experienced where you live?

Mohammed: Like a lot of musicians and artists, I think the most obvious source of support during the last year came from Bandcamp and their Bandcamp Friday initiative. That produced very tangible numbers and feedback and it was very heartwarming to experience this level of support from other musicians and fans from all over the world. With regards to the local scene, I honestly can’t say that I noticed anything changing much.

(((o))): Lastly, having created an incredible album during a time of uncertainty, loss and confusion, can you share any advice on how to get the creative juices flowing?

Mohammed: From POSTVORTA’s point of view, I think we were only able to make this album because we had a deadline and because our track ‘Hollow’ was already written and recorded pre-lockdown. It also helps that we’re six in the band so you get more ideas from more sources and it’s a bigger support network. Otherwise, it would have been very difficult. I don’t want to say something like “just keep at it and inspiration will come” because I think it is completely natural to not be able to do anything given the circumstances. Maybe look at music or any creative endeavour as an escape from the continuous doom-scrolling and a way to just detach for a bit?

Diego: I think the most constructive thing in this period is to try to turn all fears, anxieties and uncertainties into music. Never as in this period, I do find composing music a real lifeline.