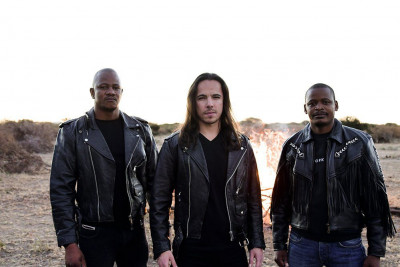 Africa is a continent rich in myths and storytelling. Much of which has not been covered by mainstream media. I thought of incorporating some these tales into the bands music. I believe this gives the listener a new perspective to listen to Metal, and also bring to attention some of these tales.

Botswana is a metal country and that is something most people will not know. The African continent is not known for their wide range of metal bands, but Botswana is the exception. And while some bands have ventured outside their native boundaries to play their music, none has seen so much as Skinflint.

The band hails from Gaborone and has been around since 2006. Having just toured the USA, the group found itself stalled by the global pandemic. Nonetheless, the spirits are ever high in Skinflint and they were glad to answer a number of questions Guido Segers had and share why they feel African stories are well-suited for metal music, what it’s like to tour with Soulfly and what comes next. Vocalist and guitarist Giuseppe “Juice” Sbrana answered the questions.

E&D: How is Skinflint doing? Has the pandemic been hard on you?

Giuseppe: It has affected us all. But fortunately, we are all fine and getting back to making music again.

E&D: What got you folks originally into metal music? What made it such fascinating music for you?

Metal is music that breaks stereotypes and pushes boundaries. It was the best platform for our artistic expression.

E&D: I’m curious as to how Skinflint started as a band and how you managed to keep a rather solid line-up for so long. Though there’s a vibrant scene in Botswana, finding the right chemistry would seem like a challenge. How is that for Skinflint?

Giuseppe: It is hard to find like-minded musicians here in Botswana as even though there is a dedicated metal following, the scene here is actually small and does not get much recognition locally. I met Kebonye at a festival in Lobatse many years ago. Cosmos, I knew him from another band he played for called Amok which disbanded. When Alessandra left the band I thought of him and asked if he wanted to try for auditions.

E&D: Musically, you are hard to place in one stylistic corner. But what I find very fascinating is that you take African mythology as part of your themes and topics in the music. I assume these are regional stories, because saying African mythology is as wide-ranging as saying European or Asian mythology, obviously. Could you say something about this and perhaps give a bit of a background for those not in the know on these themes?

Giuseppe: Africa is a continent rich in myths and storytelling. Much of which has not been covered by mainstream media. I thought of incorporating some these tales into the band’s music. I believe this gives the listener a new perspective to listen to metal, and also bring to attention some of these tales. Some are regional, some are inspired by true events and others I have played around with.

E&D: Why is it significant for you to use metal to tell these stories? What do you want people to take away from Skinflint’s music?

Giuseppe: The stories are raw, dark and strange. It fits the kind of metal we play well. I hope to see these tales told in other art forms too. I hope people can find some inspiration in them and even incorporate them into their own works. Furthermore, I would love to see more of it, in music, art, video games, comics etc as I don’t see much coverage for them. This is why I have been consistent with them throughout my career. They are important to me and most of it unheard of.

E&D: After your last record, the self-titled album from 2018, your drummer Allessandra left the band. You have a new drummer now, has this impacted the direction or sound from the band much?

Giuseppe: It has. But not too much. But not just because of her departure, but we feel like it’s time to try something new while still retaining the identity of the band.

E&D: Before Covid-19 hit, you guys were touring with your new drummer in the USA. What was that like, playing with bands like Soulfly? And since you got home on the 3rd of March, was it tense towards the end?

Giuseppe: Playing with Soulfly felt like a dream. Coming from Botswana, the only place we see these bands is on YouTube or videos. Next thing, we are sharing the stage with musicians we watched growing up. The tour was intense and a vital part of the bands’ growth process. These are the things you cannot teach but need to experience in order to achieve a higher level of playing.

E&D: You’re now getting work underway on a new album. What can you tell us about it? Has your creative process been different? What can we expect?

Giuseppe: The new album is almost done. You can expect the same raw energy the band is known for but with a few surprises. The songs are heavier this time around, with a newfound energy and chemistry within the band. You can hear a band playing with hunger and heart here. I am confident in the new material.

E&D: When do you think it’ll be out, and what plans does Skinflint have for the future?

Giuseppe: Early this year. We already have some festivals booked in Europe, and then we hope to confirm further dates in the USA too, hopefully.

E&D: Botswana is one of the few African countries with a metal scene that is globally known and seen. While it makes little sense to treat it as an oddity, it is very distinct, DIY and creative. How are things there? Which new bands are coming up that people should know about?

Giuseppe: We are proud of the scene here. With Covid hitting and the scene being on hiatus for 2 years now, nothing new has come out. It’s still the same bands that I know of. Check out Overthrust if you like old school death metal.

E&D: Your local scene was subject to numerous articles and documentaries. In what way has that impacted the metal scene? Has it been positive or negative?

Giuseppe: On the positive, it brought attention to a scene that may not have been discovered in the first place. Some of it was really good. But on the bad side some of the documentaries were all about the imagery and completely excluded the music/bands. Skinflint has distanced itself from those, as we felt it was more like a fashion show.

E&D: If you had to describe Skinflint as a dish (a type of food), what would it be and why?

Giuseppe: Braii. Putting meat on a fire in the middle of the bush. The closer to the bone the sweeter the meat becomes. That is what Skinflint sounds like. In fact, we have braii every time the band gets together to rehearse or record.