(((O))) Interview: Torsten Kinsella from God Is An Astronaut 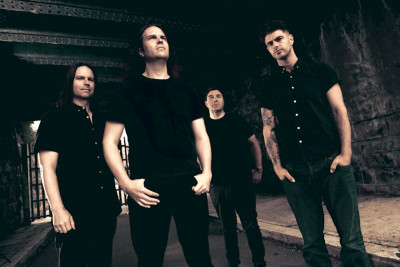 Interview: God Is An Astronaut

God Is An Astronaut on the web:
Facebook | Bandcamp |

We are very happy to be here 20 years later and still releasing music. When we began it seemed like such an impossible hill to climb, it was so difficult to get noticed with the vast amount of music that was out back then.

It has been twenty years since Irish post-rock group God Is An Astronaut appeared on the scene with their debut album The End of the Beginning. To celebrate this auspicious anniversary, they have recorded the album live in the studio and released it as as The Beginning of the End. This re-recording has given the songs a new lease of life. They sound richer, fuller, deeper, and more grandiose – perfectly fitting for a twenty-year retrospective. Critics, us included, have heaped praise on the re-release, so Nick Dunn decided to sit down with Torsten Kinsella from the band and talk to him all about it.

E&D: First of all, congratulations on making it to twenty years as a band! How does it feel to have reached this milestone?

Torsten: Thank you, we are very happy to be here 20 years later and still releasing music. When we began it seemed like such an impossible hill to climb, it was so difficult to get noticed with the vast amount of music that was out back then. The internet offered us a way to promote our music and we are very pleased that our music resonated with so many people. Today is harder in many ways, there is more music than ever before and styles come and go so quickly, so for us there is a constant musical progression to stay relevant and fresh.

E&D: Your line-up has remained relatively consistent since the band’s inception, which is an incredible achievement in its own right. How have you managed to ensure this stability over the years?

Torsten: We have always gotten on well with each other and luckily musically we are still on a similar wave length and we still enjoying playing the music. These days, Lloyd has a very busy day job and we all do our very best to work around that. Jamie returned after a hiatus and everything feels complete again. There is a hidden chemistry between us all. We are also still on good terms with Gazz who is on standby should we ever require an extra musician for special shows.

E&D: What first attracted you to the idea of making music together, and why did you decide to forego a vocalist and stick with instrumental music?

Torsten: Music has always played an important role in our lives, Niels and I are twin brothers and our father Thomas is a musician who in the 60’s played bass in a psychedelic rock band called the “Orange Machine” so we were always inspired from early age to follow in his footsteps, his support and encouragement has been invaluable. We knew for a band to work, we had to find similar minded musicians, Lloyd and Jamie also grew up in musical families, both their fathers were musicians too. The reason we ended up being predominantly instrumental really was a process of elimination, we began with lead vocals but it simply wasn’t good enough so we opted to forge ahead without them.

E&D: What is the composition process like for an instrumental band compared to one with a vocalist? Is there a concept that a song gets built around, or do they grow organically from jam sessions? Do you find it ultimately easier to not have to structure songs around lyrics?

Torsten: The composition process varies, some of the earlier songs were predominantly written on guitar, then recorded in our studio and we would continue then build on it from there. Sometimes we would begin with a piano as the starting point. We do jam things in rehearsal too and then demo them and further experiment in the studio. All our music is based on what we are feeling, we see our music as a snapshot in time. Some of the earlier songs did have a more traditional structure with quite a bit repetition. Now a days they just go on a journey with less repetition, the music takes a life of its own. I should clarify that we do have some vocals in a few of our songs even though they are kind of disguised to sound like an instrument, most of them don’t have lyrics but they do add an emotivity that keyboards can’t, very rarely we do have Lyrics. ‘Epitaph’ was one of those few times for us where lyrics did enhance the meaning.

“Distant horizon, the colours colliding,
vermillion like roses with shades of dusk.
Merging shadows descending upon me
Disturbing my solace, reminding me …
Your eyes will forever haunt me, alive then lifeless, so silent and Dreamless “

E&D: When it came to celebrating the twentieth anniversary of End of the Beginning, what made you decide to re-record the album live in the studio instead of just releasing special merchandise of the original album?

Torsten: In 2011 we released the remasters with better packaging so we didn’t want to do that again.

During the pandemic we had the chance to change our live equipment from digital amp modellers back to tube amps and pedals and we recorded our last album Ghost Tapes #10 with that setup, the sound was far rawer and more vibrant. We decided to revisit our entire back catalogue to make sure it was compatible, we started with our All is Violent, All is Bright album and because we couldn’t play any shows, we did a live stream which turned out great. We did another live stream “Live @ Opium, Dublin” where we played Ghost Tapes #10 and a few songs from Far from Refuge, we were very happy with how it turned out. We moved on to the rest of the back catalogue, everything sounded good. The big challenge of course was the first album which we left to the end, it was predominantly an electronic record with lots of samples and loops, so a lot of that earlier songs were either never performed live or left in the past. Niels and I felt a need to revisit that album as it is an important part of our identity.  With our 20-year Anniversary coming up, it felt like right time to revisit the past and bring it back to the present.  Songs like ‘The End of the beginning’ and ‘From Dust to the Beyond’ have always been regulars in our live set and throughout the years we made improvements and improvisational parts to enhance the live experience, we wanted to capture that. Other songs like ‘Lost Symphony’ we never played live. We faced some interesting challenges, with ‘Lost Symphony’, ‘Coda’ and ‘Twilight’ they had reverse sections of music and we had to try interpret that live, I really like how those sections turned out. The first album had no live drums, only loops and some basic programming, Lloyd hadn’t joined the band yet when the first album came out, he was always a big fan of the first album and finally had the opportunity to modify the beats while still staying true to them. Jamie who only joined the band in 2011 did a lot of work with the piano parts and I think he really improved them.

E&D: In layman’s terms, what is the difference between a “normal” album recording in a studio and the process of recording an album live?

Torsten: Niels and I felt very strongly that this had to be a live recording, we didn’t not want this to be a re-recording of the first album. The only way to achieve our goals was for all us to play together at the same time in the same room, we chose “Windmill Lane recording studios” in Dublin because they have a huge live room that could fit the entire live setup in. We had a few ground rules, no over dubs, no individual or isolated takes, no double tracking, these are common techniques used to make normal album recordings. Instead of trying to achieve perfection we aimed for a good energy. We performed the way we do at our live shows, the only difference was no stage, no PA or crowd but everything else was the same, the 4 of us in one room with close mics and distant ambient mics capturing everything, there was nowhere to hide.  We even had our FOH live sound engineer Zack to set the mixing board up the same way he does at live shows.

E&D: Did the impact of playing the songs live on tour change how you played them in the studio when it came to re-recording album?

Torsten: We made sure that we played the live versions of the songs with faster tempos and added improvisational sections, the aim was never to carefully do a better re-recording of our debut Album and to essentially replace it, that would never have worked for me. There is a different energy to The Beginning of The End compared to the debut album and for the record I don’t believe one is better than the other, they are simply different.

E&D: Do you feel in any way different about the album now that you’re looking back on it fully after 20 years?

Torsten: Not really, when we started playing those songs again, it brought us back in time to the mind set of those early days. We rehearsed those songs for an entire 6-week period and at that moment it felt like the beginning, that this was our only material, our only identity, it was a very nostalgic experience.

Torsten: Perhaps, we are not sure yet if we will do any more live recordings of the older material. The S/T would be very interesting to do. Origins too but for different reasons, we have new arrangements for Reverse World and The Last March which I feel are better in every way to the originals. For the next record, I think it will be a mix of both, the core will be the band in the room but we won’t rule out over dubs, double tracking or added guest musicians.