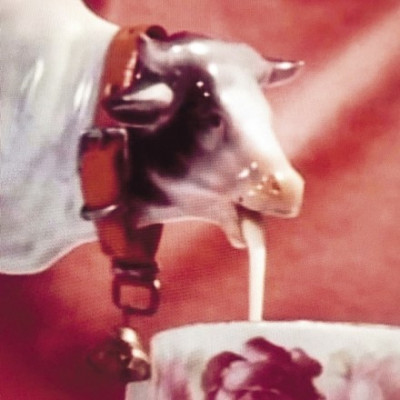 When we think of noise rock, we often think of the shrieking vocals as being a component that is almost as key to the music’s overall abrasiveness as the howling guitars. That’s definitely the case with modern noise rock bands like tunic, BUMMER, and exhalants, but it’s also a principle that applies to originators of the genre like the Butthole Surfers and Scratch Acid. With their debut album, ZAHN, who comprise the rhythm section of the brilliant HEADS. and sometime Einstürzende Neubauten keyboardist Felix Gebhard, demonstrate across a suite of eight instrumentals that noise rock doesn’t have to have vocals at all in order to be noisy.

Gebhard and Wolfgang Möstl from Melt Downer’s trebley guitars on opening track ‘Zerrung’ set the tone well for what is to come, soaring above the hammering, propulsive bass and drums laid down by Chris Breuer and Nic Stockmann, before striking a truly dark, foreboding, and droney power chord in the track’s final 30 seconds or so. This sort of gloomy, droney power chord also dominates ‘Gyhum’. The guitar is much higher up in the mix on ‘Pavian’, ‘Lochsonne Schwarz’, and ‘Tseudo’, helping these songs assume a slightly cinematic tone reminiscent of Joe Lally and Brendan Canty’s The Messthetics. The synths and sax on ‘Gyhum’ also reminded me of GNOD, which is always a good thing. This is music that evokes the buzz, stress, and alienation of living in a big, vibrant city; which is entirely as you would expect, given that these guys are from the creative hub that is present-day Berlin. ‘Schrank’ and ‘Aykroyd’ bring a welcome dose of Unsane-style heaviness to proceedings, before ‘Staub’ concludes the album in eerie, spacey fashion.

This is a very impressive debut album. I was initially a little sceptical about the lack of vocals and it’s certainly understandable why that would be a stumbling block for many, but this just leaves it up to the listener to imagine what stories are being told here by the music. And stories are indeed being told here by this music, for this is one of the most atmospheric albums you’ll hear all year. I normally don’t like to use the phrase ‘soundscapes’ to describe music as I’ve always found it pretty wanky and pretentious, but ZAHN is a rare instance of an album that makes me slightly inclined to do so. It’s perhaps understandable that Breuer and Stockmann wanted to work on a project that would allow their instrumentation to control the music’s mood after so much of the tone of the last HEADS. album was dictated by Ed Fraser’s distinctive vocals. The lack of vocals only adds to the mystique of these tracks, leaving it to the listener to use their imagination to figure out what this music is about. Fans of bands like Part Chimp, GNOD, Human Impact, and HIRAKI won’t want to miss this.