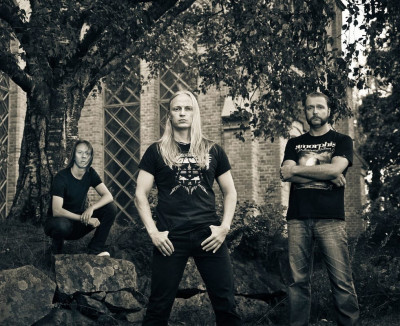 The whole Deathstar process took three years. When we started to rehearse and record this new album, we didn’t have a record deal. We had just passion to play and record the new album.

Finnish death metallers Convulse have made a long awaited return with their new album Deathstar, their first since 2016s Cycle Of Revenge and its a fine collection of progressive and melodic death metal. We had a chat with Convulse guitarist and vocalist Rami Jämsä to hear all about Deathstar and the return of Convulse as well as looking back on their early days, the history of the band and metal in their native Finland.

(((o))): You have just released your new album Deathstar. How did the recording and creative process of the album go?

Rami Jämsä: The whole Deathstar process took three years. When we started to rehearse and record this new album, we didn’t have a record deal. We had just passion to play and record the new album. We saved money for three years to cover proper studio costs in an excellent analog studio with a professional recording and mixing engineer. We are mature band and we like to work together and have a real album recording and mixing sessions. After all, I think all went smoothly, but of course it took a lot of time and there was also stressful moments during the whole process.

(((o))): What are the lyrics on the songs on Deathstar about? What does the albums title refer to?

Rami Jämsä: It is a concept album about the condition of humanity and our planet.

(((o))): It’s been four years since your last album Cycle Of Revenge. How have Convulse developed as a band since then?

Rami Jämsä: We have continued rehearsing weekly after Cycle Of Revenge and we have found the natural way to express ourselves as a trio band. You can hear it on the Deathstar album. We have become more mature and sure about what we want to do.

(((o))): How have you been keeping busy during these difficult times the world is experiencing?

Rami Jämsä: It’s not a good time to run a band, but Convulse is not our day job. We do this, because we love to play. It means that during these years we have done only shows that are reasonable for us. Hopefully the covid situation becomes better someday, so the people can start to live normally again and we can play live shows again for you. In Finland, we have a quite good situation. In spring, we had over two months lockdown and it sucked. The second wave is on our back door and I really hope we can continue our normal day jobs and hobbies.

(((o))): Will you be playing any live dates once things get back to some sort of normality?

Rami Jämsä: I really hope the situation will be so good that playing live shows is enough safe. We will wait for that.

(((o))): What has been the most memorable gig or tour that you have ever played with?

Rami Jämsä: I really like to travel and see different cultures and meet people. After all, I am a lucky man, who can travel and play at the same time sometimes. For example, Japan and Asakusa Deathfest were very nice and so was 70000 tons of metal cruise.

(((o))): This year marks thirty years since your first demos. Did you think then you would still be releasing albums thirty years later?

Rami Jämsä: Never. I was 17 years old when we started Convulse and I thought that over twenty years old people are seniors. But at the same, it’s not a surprise that I play still guitar and run a band. I have always loved it so much.

(((o))): What are your main memories of those early days of Convulse?

Rami Jämsä: Anger and ambition to be somebody. Nice underground days with active underground scene. Tape trading was the 90´s metal Spotify.

(((o))): You released albums on Relapse in those early days. How did you come to sign to the label and what was your time there like?

Rami Jämsä: We sent our demo tape to Relapse after Thrash records split up and Relapse got interested. Somehow Relapse was quite a distant label. Part of the story was that we recorded Reflections in December 1992 and went to mandatory military service for the whole year of 1994 so it marked a year of hiatus for us. Perhaps it was the reason why Relapse released Reflections in Spring 1994. We had several problems and line-up changes 1994 when we tried to run Convulse again.

(((o))): The band went on hiatus for a number of years in 1994 until coming back with the Inner Evil EP and Evil Prevails album. What led to the bands inactivity and subsequent return?

Rami Jämsä: Convulse withered away naturally, but I didn’t quit playing. I have played guitar all these years in bands like Pornorphans and When the Empire Falls. The World Without God reissue and the festival offer from our local promoter lead to the idea to form Convulse again. At first I thought that we only rehearse for the one show, but here we are. During the beginning of the 2010 decade my band When the Empire Falls was splitting up, so the time was also right for me.

Rami Jämsä: Very grateful. This time we have had chance to travel and play abroad too. It is really nice to notice that there are so many Convulse fans all around the world. I understand people mostly like to hear our iconic World Without God album live and we serve you. But at the same time I have to write new music to keep things running. That is the combo, that works just fine for us.

(((o))): What was the extreme metal scene like in Finland back when you started and what is it like now?

Rami Jämsä: Bands are getting older these days, because there are quite few youngsters who play in a metal band. Back in the 90s we had several metal bands in a small town. Music hasn’t died, but mostly I see new rap or pop artist coming these days.

(((o))): What are some of your favourite Finnish metal bands both past and present?

Rami Jämsä: From traditional heavy to speed metal. From speed to thrash metal and finally with Death, Pestilence, Autopsy and Bolt Thrower to death metal.

(((o))): What are your top three death metal albums ever released?

(((o))): Who are your biggest influences as a musician?

Rami Jämsä: I listen to music very open minded from classic to folk and from pop to grindcore. My forever favorites are Kingston Wall, Dire Straits, Pekka Pohjola and Iron Maiden.

(((o))): What have been some of your proudest moments of your time with Convulse?

Rami Jämsä: Perhaps this long journey. I am grateful that we have had chance to play worldwide live shows and we have passion to create new albums as well.